John Wright off to winning start as New Zealand coach

Having been whitewashed on the tours of Bangladesh and India only a few months ago, New Zealand have got off to a flying start in their home season under their new coach John Wright, who has had a big reputation. 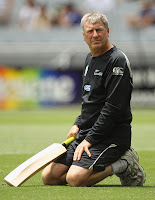 Registering back to back victories in the Twenty20 Internationals against the unpredictable Pakistanis, the Black Caps have gained an unassailable lead in the three-match series which is already being talked about as quite an accomplishment from a team so low in confidence.

The appointment of Wright as coach was bound to make a difference for the New Zealanders and we have already found it out in the first couple of games when even a depleted side of their has won both the matches quite convincingly.

If New Zealand continue their winning streak and pocket the third and final T20I as well it would be a unique whitewash by a team which itself had suffered similar humiliation in the earlier two series. 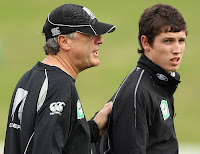 Bangladesh and India had humbled New Zealand in nine consecutive limited overs games, all of them being One-day Internationals. I think it doesn’t matter much for them even if their conquest has come in the shortest format of the game.

The win-starved New Zealanders needed something under their belt to regain confidence that could take them to the World Cup to be held in India, Bangladesh and Sri Lanka only a couple of months later.

They have to take on Pakistan in a series of six ODIs after the two Tests that follow the T20Is. In normal circumstances New Zealand would have preferred playing ODIs straight after the T20 games instead of squeezing a Test series but I think this has been done to give the hosts the much needed practice of 50-overs game on the dates closest to the World Cup.

There were indications that the New Zealand cricket administrators were shaken by the debacle of their team in Bangladesh and India. Well if it served as a wake-up call and prompted them to turn to Wright then this could well prove to be a blessing in disguise for their cause. 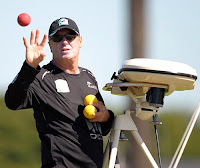 I don’t know why did they take so long to get hold of the man who was very much there with them. Wright was the person who turned it around for India and taught them the art of winning matches away from the comfort of home.

Wright’s role as a coach in building the India team of today is phenomenal. The former New Zealand captain made a perfect combination with Sourav Ganguly and they put India on the road to glory.

The cool headed Wright instilled the confidence which was somehow missing even in the star-studded Indian line-up. He was accorded the respect he deserved and together they made things happen.

Now the New Zealand cricket needed him to lift the morale of a demoralized outfit. It has only been weeks when he was handed over the charge and the results have come instantly. This is a belated move but nevertheless one in the right direction and as they say better late than never.