Asjad Iqbal had done it before, having overpowered Mohammad Asif in the final of the National Bank of Pakistan (NBP) Ranking Snooker Championship. But the victory at the NBP Sports Complex in Karachi on August 27, 2013 tasted sweeter for he had now outwitted the reigning world champion. 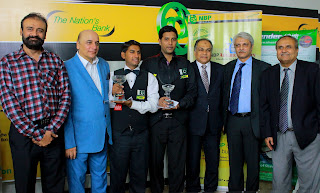 Sponsors NBP could not have asked for a better outcome of the event. Both the finalists belonged to them. The final lasted almost six and half hours and the both the contestants were exhausted in the closing stages of the marathon battle.

The NBP tournament continued to bring good fortune to the 21-year-old Asjad, who has now won the title three times in last four editions. The lad from Sargodha kept his cool until the end, not having shown any signs of nerves while coming to terms with the world champion. His body language remained positive throughout the final.

The 31-year-old Asif, hailing from Faisalabad, had reasons to feel hard done by the rub of the green going the way of his opponent but he was sporting enough to praise him publicly for having withstood the pressure of a final.

Shoaib Ahmed Siddiqui, Commissioner Karachi, was the chief guest in the presentation ceremony, which was delayed by an hour due to the extended duration of the final. Iqbal Qasim, Divisional Head Sports & CSR, and Qamar Hussain, Divisional Head HR, of NBP were also present on the occasion alongwith Alamgir Anwar Shaikh, Munawwar Hussain Shaikh and Abdul Wahid Qadir, the top officials of the Pakistan Billiards &  Snooker Association (PBSA).

In his welcome speech, the PBSA President wholeheartedly acknowledged the support of the print as well as the electronic media in raising the status of snooker. He didn’t make a mention of digital media, however.
readmore »»