The brilliance of Mohammad Faisal Khan allowed India to retain the crown as they prevailed over arch-rivals Pakistan in the final of the 2nd Asian Team Event Snooker Championship 2014 at Hotel Avari Towers, Karachi, on August 23. 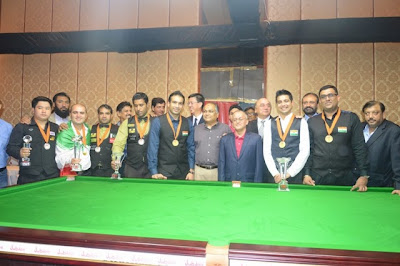 The presentation ceremony was held soon after the conclusion of the final in which handsome cash prizes, trophies and medals were awarded to the outstanding performers.

Tahir Ahmed, Managing Director, Jubilee General Insurance, was the chief guest of the evening while Shoaib Ahmad Siddiqui, Commissioner, Karachi, was the guest of honour. They credited the organizers for doing a fabulous job.

The top functionaries of the Asian Confederation of Billiards Sports (ACBS) and the Pakistan Billiards & Snooker Association (PBSA) were also present on the occasion.

Earlier in the day, the Indian trio had stunned the favourites Iran, being represented by Hossien Vafaei Ayouri, the 2011 world champion, and Amir Sarkosh, having clinched the Asian 6-Reds title a few days ago, in the semifinals 3-1 with the frame scores of 136-0, 76-4, 58-61, 82-42.

Pakistan had cruised in the final by hammering the dangerous Thailand, having Kritsanut Lertsattayathorn and Boonyarit Kaettikun, in the semifinals 3-1 with the frame scores of 71-53, 119-12, 1-76, 62-13.

Faisal Khan remained India’s hero of the day as he starred in both the crunch matches which motivated his teammates, Kamal Chawla and Dharmendra Singh, to also rise to the occasion. He won both his singles matches in the final against Pakistan.

He got his team off to a flying start as blanked Mohammad Asif in the opening frame, chalking up a fantastic break of 70. The momentum was sustained by Kamal Chawla who outfoxed Mohammad Sajjad in the next frame, compiling a superb break of 91.

Asif-Sajjad pulled it back for the home side by winning the doubles frame against the duo of Faisal Khan and Dharmendra Singh. Sajjad was under intense pressure when he appeared to take on Faisal Khan in the fourth frame and the latter pressed home the advantage. He capitalized on his early lead and overcame some nervous moments to seal the fate of the tournament.

Faisal Khan had led India off to a spectacular start in the semifinals too, registering breaks of 81 and 55 in the opening frame against the supremely confident Amir Sarkosh. Kamal Chawla doubled the lead by outplaying Hossien Vafaei Ayouri. The Iranians kept the contest alive by narrowly winning the third frame but it was all over for them when Kamal Chawla defeated Amir Sarkosh in the fourth frame.

In the other semifinal, Mohammad Asif edged out Kritsanut Lertsattayathorn in the opening frame and Mohammad Sajjad, with a classy break of 85, humbled Boonyarit Kaettikun in the next frame. The Thailand pair comfortably won the doubles contest but Mohammad Asif outgunned Boonyarit Kaettikun in the very next frame to guide Pakistan into the final.
readmore »»