England’s women cricketers are on a high. Having won the World Cup in Australia earlier this year they are now eyeing the ICC World Twenty20 having retained their top guns for the showpiece event to be held in their own backyard this summer. 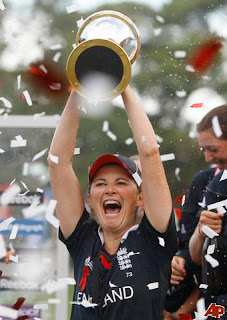 Charlotte Edwards, who led England to title victory in the World Cup, appears in a very positive frame of mind and she reckons that keeping the nucleus of the World Cup-winning squad intact will boost the chances of the hosts winning the World Twenty20.

England have made only three changes to the 15-man squad that carried the World Cup home from Australia, Georgia Elwiss, a fast bowler from Staffordshire, and two off-spinners, Danielle Hazell of Yorkshire and Sussex’s Rosalie Birch.

“We have tried to keep the nucleus of the World Cup squad together. We have got a good, sound squad there. We have prided ourselves on keeping consistency in selection. People are very clear on their roles, and I think it’s been one of the biggest factors in our success," the Kent all-rounder remarked in a recent interview.

England may have swept all before them in women’s cricket’s flagship event, but the their skipper feels that this summer’s World Twenty20, with a combined men’s and women’s finals day, will propel the women’s game higher into the public consciousness than ever before.

“This is the biggest occasion for women’s cricket so far. I know the team is looking forward to it, having the momentum from Australia. I enjoy Twenty20 - I average over 50 - no fear of failure comes into Twenty20,” Edwards said.

“A few days after the World Cup myself and coach Mark Lane had forgotten about it and were preparing for the T20. We can’t rest on our laurels because this could potentially be the biggest yet for England’s cricket team,” she added.

Taunton is a special ground for the England women’s team and has also impressed so many of the touring sides that have played here.

“Hosting such a major event is a great coup for Taunton and Somerset. Women’s cricket is now a major player in global sport and we look forward to welcoming the world’s best teams in 2009, particularly as by then we will have completed the first tranche of our redevelopment and will be able to provide a world-class cricketing arena to go along with our world-class pitches,” Somerset’s Chief Executive Richard Gould stated.

The warm-up games of the women's event will be held on June 8 and while the league matches will be organized from June 11 to 16. The semifinals will be taking place on June 18 and 19 with the final and the presentation ceremony scheduled to be held on June 21. 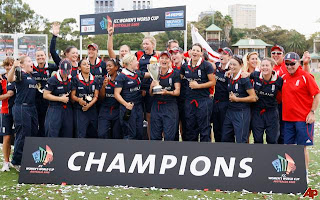 The women’s tournament of the ICC World Twenty20 2009 consists of eight teams with the group stage games hosted at Taunton. The eight teams that participated in the 2009 women's World Cup will not only play in the upcoming event but also the 2010 World Twenty20 in West Indies.

Pakistan and West Indies have booked their place in the 2011 qualifiers already, by coming fifth and sixth at this World Cup, while the teams below them will have to earn their spot in the qualifiers.