I hope that the so-called experts who assessed the various bowling attacks of the world for a website the other day did get the opportunity of watching the Micromax Cup 2010 do-or-die encounter between India and New Zealand at Dambulla on August 25. 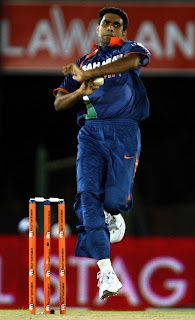 The ‘learned’ trio of Ian Chappell, Allan Donald and India’s own Sanjay Manjrekar had described the Indian bowling as the weakest in world cricket these days. Well if India’s second string of quickies were good enough to reduce New Zealand to 53 for eight before eventually bowling them out for 118 it reflected their potency more than anything else.

It was the quartet of Praveen Kumar, Ashish Nehra, Munaf Patel and Ishant Sharma who bowled superbly to engineer an impressive 105-run victory for India that took them to the final.

It’s not often that the Indians play four fast-medium bowlers in a game but the conditions in Dambulla prompted their think-tank to do away with the conventional strategy of relying on spinners.

The conditions at Dambulla were certainly in favour of the fast bowlers, particularly under lights, but they still needed to put the ball in right areas and create pressure in order to defend a modest total of 223.

Kumar started the slide and Nehra, who didn’t concede any run apart from three wides in as many overs, joined in the act soon. Sharma broke the threatening fifth wicket partnership before Patel removed three batsmen in quick succession to seal the fate of the game.

Only Sharma would have been a certainty if India were not handicapped by the injuries to their key fast bowlers. Zaheer Khan and Shantikumaran Sreesanth would definitely have carried the burden of attacking the opponents with the new ball, had they been fit.

Another ‘key’ element missing from the Indian bowling attack in Dambulla is the wily off-spinner Harbhajan Singh, whose vast experience of international cricket makes me an automatic choice in the playing eleven.

The Indian bowlers, unlike the South Africans, Australians and Englishmen, have had to bowl in very tough conditions at home. The pitches in India of late have heavily been loaded in favour of the batsmen and life has been tough for their own bowlers. 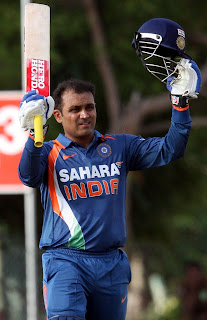 Well the Indian fast bowlers had to be grateful to Virender Sehwag for having given them the runs to play with in the crucial game against New Zealand. Had Sehwag not batted in the typically aggressive style of his to compile yet another ODI century, the Indians would have been in dire straits.

"Since I was in form, I thought I will score more than the others. If I take more strike, then there is a smaller chance of others getting out," the mercurial opener remarked after having played one of the greatest ODI knocks of his career.

"The wicket was behaving better today than it did in the other matches and I knew in the first couple of overs that if I applied myself and batted cautiously, then it will be a good track to bat on. So in the first few overs, I was just watching how the wicket was behaving and after that I started playing my shots. I knew once I start playing my shots, the bowlers will be on the back foot and they will give me more loose balls," he added.
readmore »»