Omar Associates regained the trophy by toppling National Bank of Pakistan (NBP) by 29 runs in the final of the 5th Naya Nazimabad Ramazan Cup Twenty20 Cricket Tournament 2018 under floodlights, at the Hussain Lawai Stadium in Karachi on June 4. 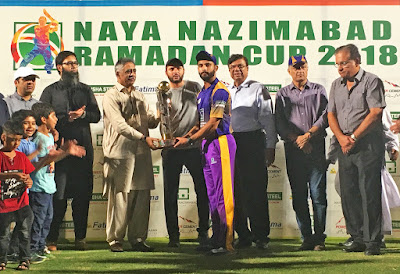 Opener Usman Khan smashed a breezy 71 and all-rounder Muhammad Nawaz followed up his rapid 29 with a three-wicket haul to engineer yet another title victory for Omar Associates, who had also clinched the inaugural edition of the tournament in 2014.

The ground was already packed to capacity when Omar Associates chose to bat first after winning the toss.

They entertained the crowd with sizzling strokes and piled up a huge total of 201 for seven in the allotted 20 overs.

Openers Umar Akmal and Usman Khan gave their team a flying start by blasting 64 in the six overs of power play. Umar slammed two sixes and five boundaries in his 46 off 28 balls. 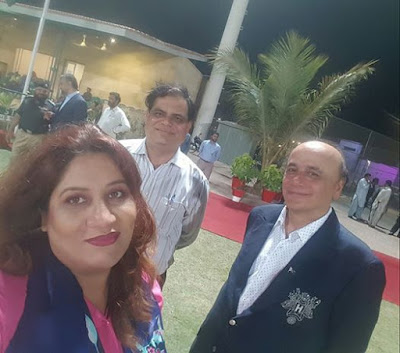 The momentum was maintained despite losing three quick wickets in space of six balls for just one run. Bilal Asif took two wickets on successive balls that of Umar and Sami-ur-Rahman for golden duck while Saad Nasim was dislodged by Sohail Tanvir also for a duck which had reduced Omar Associates to 67 for three.

Usman, however, batted brilliantly under pressure and hoisted four sixes besides belting half a dozen boundaries in his 71 off 36 balls to lift his team’s total. In the end Nawaz plundered 26 off 12 balls with three massive sixes and one four to set a difficult task for their opponents.

The chief guest presented a glittering trophy alongwith a cash award of Rupees 12 lacs to the winning captain, Saad Nasim, while the runner-up trophy was collected by the NBP skipper, Bilal Asif, with a purse of Rupees six lacs.

The Rupees 40,000 Man of the Match award for the final was shared between Usman Khan and Muhammad Nawaz of Omar Associates.

Bilal Asif was declared the player of the tournament for his all-round excellence while Sahibzada Farhan and Zafar Gohar, both of them from Sui Southern Gas Company (SSGC), were adjudged best batsman and the bowler of the tournament respectively. The trio received Rs 25, 000 each.
readmore »»