The sequence of unexpected results continued as the Indian Premier League (IPL) 2009 entered in the final phase of its league matches. Both the games on May 20, the penultimate day of the first round, followed unusual patterns and produced amusing results. 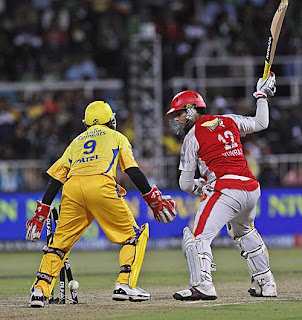 The pitch at the Kingsmead in Durban was not very conducive to stroke-play and the conditions were indeed tough for batting. Yet one expected more number of runs to be scored since it was a Twenty20 contest and the participating teams had quite a few masters in their folds. Such has been the trend in the tournament that anything cannot be taken for granted and the unlikeliest of things could happen any moment.

Obviously one would have thought Kings XI Punjab would chase down the target of 117 in 20 overs against Chennai Super Kings. But for one more time the Punjab batsmen were guilty of not doing justice with their big reputation and the match was thrown.

Under the circumstances one can’t be sure if Kings XI Punjab felt bad or dejected at having lost the game in pursuit of a modest total that virtually meant the end of the road for them as far as this tournament is concerned.

It’s quite extraordinary how Yuvraj Singh, who can so quickly change the complexion of the game single-handedly, was found wanting in his role of a finisher in this particular. He has earned India some famous victories with his awesome hitting but he was somehow unable to do the job for Kings XI Punjab.

Nobody can believe that Yuvraj actually consumed 19 deliveries for scoring just six runs. The dasher, everyone knows, has the capaiblity of smashimg a half-century of these many balls. But he chose to play the Twenty20 game as if playing out time to draw a Test match.

Yuvraj’s tactics must have shocked the millions of his fans all over the world who must be wondering what actually had gone wrong with him.

Obviously it can only be desribed as a mystery that a batsman of the class of Yuvraj would look live novice while facing the spin bowlers in conditions that were more suited to seam and swing bowling. 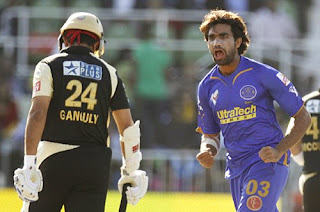 In the other game of the day the defending champions, Rajasthan Royals were knocked over by Kolkata Knight Riders, languishing at the bottom of the points table.

The result meant the journey was also over for Rajasthan Royals, who had come up with stunning performance last year to capture the trophy. Shane Warne’s boys have not been able to make it to the semifinals this time round.

They fought back gallantly after having been skittled for 101. The match had come alive when Kolkata slumped to 45 for six in the 12th over. A fine partnernership between Laxmi Shukla and Charl Langeveldt ended whatever hopes Rajasthan had of sneaking a win. It was a consolation victory for Kolkata who had been very disappointing in the earlier part of the competition.