The trio of Shikhar Dhawan, Rohit Sharma and Virat Kohli came up with awesome batting performance at the Sawai Mansingh Stadium in Jaipur on October 16 to script a historic ODI win over Australia. 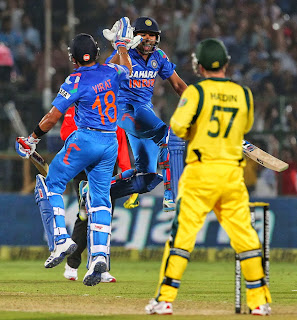 Left-handed Dhawan batted in his usual dominating style, Sharma didn’t throw his wicket for a change and returned undefeated while Kohli came up with another standout cameo to prove the world is at his feet.

They made a mockery of the huge Australian total of 359 and the impossible-looking target was achieved with nine wickets and 6.3 overs in the bag.

Not surprisingly it was India’s highest-ever successful chase in ODI history, making up for quite a few near-misses in the past.

Kohli broke the record for the fastest ODI hundred by an Indian, which belonged previously to Virender Sehwag, who has not even been selected for this series due to emergence of the shining young stars and a dip in his own form. 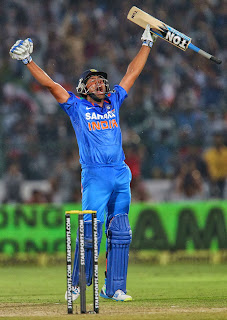 Sharma, under fire despite performing well in the role of an opener, silenced his critics with a phenomenal knock that should also relieve the team management who have continued backing him all along.

"It was very important for me to play the big innings. It took a long time coming, but I would like to say that the hardwork never stopped. I wanted to bat throughout the innings, I agree that I have played some stupid shots to get out, but this was much needed. Both Shikhar and I understood the pitch and managed the chase, and Virat came and played a strong innings and his innings needs a mention as much as any," Sharma remarked after receiving the Man of the Match award, ahead of Kohli, now the fastest Indian ODI centurion.

"I think this is one of the best you can see, irrespective of the field restrictions and the pitch, it was still a tall chase. I told them not to look at the target and just go and play. Shikhar batted very well, Kohli was amazing, Rohit got a big knock. It was an ideal pitch, fast outfield, but you need to keep the shape as a batsman, that's what they did well," skipper Mahendra Singh Dhoni summed up. 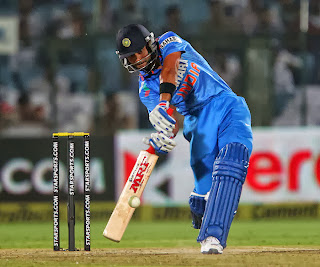 Our batting is looking good, but it's unfair to assume the batsmen are going to chase a 300-plus target every time. Most of our guys have played international cricket, but most of them don't have the experience of a Yuvraj Singh who has played over 250 matches, what you have to do is to be aggressive, but what is important is that you don't have to slog, you have to maintain good shape,”he added.

The Indian captain, however, remained concerned with his bowlers, having leaked in the excess of 300 on both occasions so far.

“Bowling, we need to improve. The reason is that if you attempt a yorker and it becomes a low full toss its fine, but if it becomes a waist-high full toss, then the margin is too much. It's one area we are looking to improve," he pointed out.
readmore »»