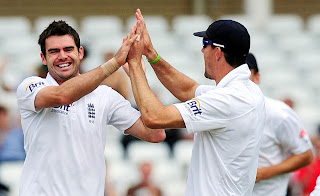 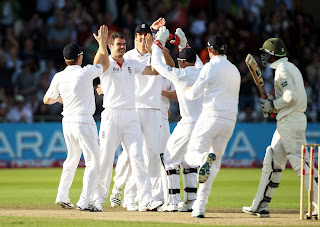 Andrew Strauss and his men have done nothing exceptional. Their batting also collapsed in both outings but the bowlers didn’t let the team down and the result was hardly ever in doubt. Birthday boy Anderson remained on song and his 11-wicket haul was a perfect gift to his teammates.
readmore »»

The prize distribution ceremony of the Karachi Press Club’s Summer Sports Festival 2010, held on July 30, turned out to be quite an event with the likes of Dr Mohammad Ali Shah and Shoaib Ahmed Siddiqui making the occasion a memorable one. 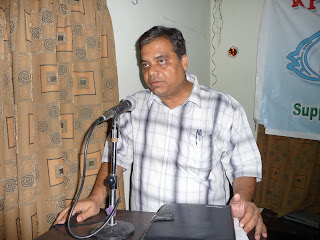 The Ibrahim Jalees Hall was already packed to capacity when Shoaib Siddiqui, Secretary Sports & Youth Affairs to the Government of Sindh, arrived at 6.45 pm and then the convoy of Dr Shah reached the club within the next 15 minutes.

As planned the ceremony started at a few minutes past seven and the intensity remained high until the prizes were distributed after speeches by the two dignitaries and the top officials of the club.

As promised cash awards were disbursed among the top three position holders of all five tournaments. The winners were presented Rs 5,000 each and those having ended runner-up received Rs 3,000 each. There was also a purse of Rs 2,000 for each of those having finished third in their respective events. 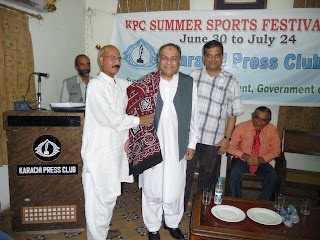 Besides the cash there was also an incentive in the shape of a certificate of merit, documenting the award and carrying the signatures of Dr Mohammad Ali Shah, Shoaib Ahmed, Imtiaz Khan Faran, A H Khanzada and Syed Khalid Mahmood.

Khurram Baig, who won the table tennis tournament, was quick to remark that he would cherish the certificate and preserve it for a while. The statement was reflective of his positive mindset.

The other award winners were also quite delighted and it was very heartening indeed that all of them turned up to receive the award personally from the chief guest. A couple of them reached the venue a few minutes late but most importantly they made it and their moment of glory was seized by the camera.

The speeches of Dr Mohammad Ali Shah and Shoaib Ahmed Siddiqui were music to the ears of the members of the Karachi Press Club who were thoroughly praised for their enthusiasm in the field of sports besides discharging their professional duties.

They were appreciative of the sporting spirit of the Governing Body of the club that took the decision to revive the Sports Festival. 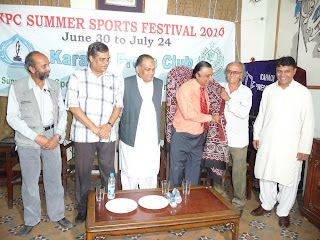 The KPC officials present on the occasion also did not let go the opportunity of recognizing the monumental efforts of Dr Shah and Shoaib Siddiqui in bringing sports to life throughout the province. They have also been instrumental in building a solid relationship between the sports department of the Government of Sindh and the KPC.