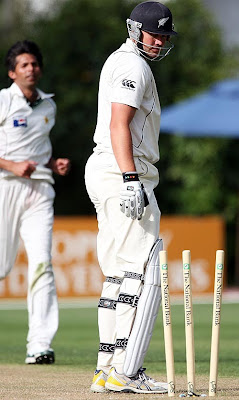 Mohammad Asif, the tall Pakistan fast bowler, has finally resumed his Test career. Although he didn’t look all that menacing on the opening day of the first Test against New Zealand at the University Oval in Dunedin but his immaculate line and length tested the home batsmen and he should be happy for having picked up three wickets on his first day of return.

In fact he came very close to finishing the day with a haul of five wickets. Umpire Simon Taufel had answered in affirmative when the fast bowler appealed for leg before against Brendon McCullum after beating him with an off-cutter in the final over of the first day’s play.

With the Umpire Decision Review System in place, the verdict was challenged by the batsman and the television umpire, Rudy Koertzen, disagreed with the judgment of his on-field colleague and it was subsequently reversed.

Swinging the ball appreciably, he had earlier in the day narrowly missed the scalp of Ross Taylor. The off-cutter had hit Taylor just outside the line and umpire Billy Doctrove turned down the appeal. Pakistan then referred the appeal to the television umpire that wasn’t successful either.

Asif has made a comeback to Test cricket after a couple of years. After having shown a lot of promise in his early years he has been laid low by the drug-related controversies having jeopardized his career.

Although he is nearing his 27th birthday now, he remains confident to make up for his long absence from the international arena.

"I have not played in New Zealand but have heard a lot about the pitches and conditions there and hopefully if I can get a chance I will make an impact. The key is to focus on just cricket and try to make up for lost time,” he was quoted as saying after his inclusion in the Pakistan squad for the Test series against the Black Caps.

He could not participate in the preceding series of One-day Internationals and the Twenty20 Internationals against New Zealand because they were being staged in the United Arab Emirates (UAE) where he was stopped at an airport last year when a small quantity of a banned substance were recovered from his possession.

Asif, however, had made his return in international cricket by making the cut in the ICC Champions Trophy held in South Africa prior to the limited overs series against New Zealand in the UAE. 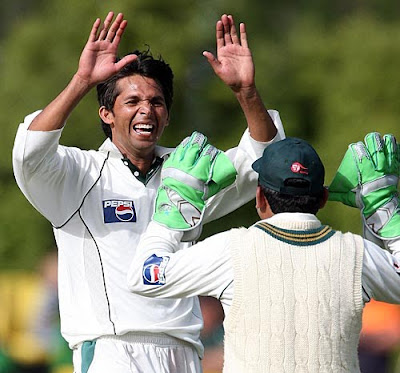 He was not played in the first couple of games but he an impression right away by claiming two wickets in the encounter against Australia, the eventual champions. He bowled quite superbly in his last spell and came very close to engineering an unlikely win for his team.

Asif has shown that he’s very much capable of producing the goods but what remains to be seen if he would be able to do it consistently at the international level.

With Pakistan due to play a lot of international cricket during the next one year, he has to play a key role in the fast bowling department. He may have lost some pace but his incredible control over line and length can still do the business.