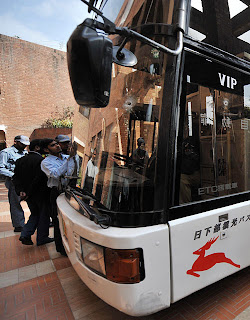 By Syed Khalid Mahmood
March 3, 2009 will go down in Pakistan’s sporting history as the darkest day. It was for the first time in Pakistan when the sportspersons were directly targeted. The visiting Sri Lankan cricketers were attacked when they were on their way to the Qaddafi Stadium on what was to be the third day of the second and final Test.
Half a dozen Pakistani policemen sacrificed their lives in the process of protecting the lives of the Sri Lankans, five of whom were among 19 wounded, in the daylight attack.
Skipper Mahela Jayawardene, his deputy Kumar Sangakkara and the mystery spinner Ajantha Mendis received minor injuries but star batsman Thilan Samaraweera and opener Tharanga Paravitarana were seriously injured.
The Test match was abandoned right away and the tour was called off. The Sri Lankan squad, having endured nightmarish moments earlier in the day, must have heaved a sigh of relief after safely landing in Colombo.
The Sri Lankan captain was quick to point out, upon his arrival in Colombo, that it was their own terror background that helped them in saving their lives when the bus carrying them to the stadium was ambushed.
"We have been brought up in a background of terrorist activities. We are used to hearing, seeing these things - firing, bombings. So we ducked under our seats when the firing began. It was like natural instinct," he was quoted as saying.
Jayawardene, very sportingly, also said that the attack on the team could have happened anywhere and could not be pinned down to Pakistan.
The other teams might have panicked in such circumstances that would have obviously caused greater damage. The Sri Lankans handled the situation very well during and after the attack.
Sri Lanka, after having piled up a total in the excess of 600 in the first innings for the second Test running, must have believed that they had a realistic chance of winning the game which would have also given them the series.
Thee march towards victory was in their thoughts when they boarded the bus at 8.30 am. As Sangakkara wrote in his diary they were all looking forward to the third day's play and trying to win the series. 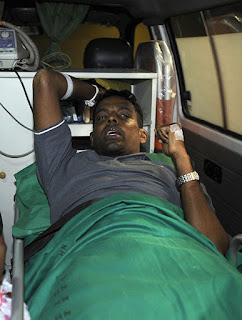 He added: The bus was full of the normal banter. Players traded stories, mostly about Lahore shopping, and cracked jokes. Others chatted about the cricket and the crucial first session. Then, as we approached the large roundabout before the Gaddafi Stadium, we suddenly heard a noise like a firecracker. The bus came to a halt and some of the guys jumped out of their seats to see what was happening. Then came the shout: "They are shooting at us!"
“The truth is we owe our lives to the courageous Mohammad Khalil, the driver. I will forever be grateful to him. The tyres of the bus had been shot out and he was in grave personal danger, exposed to gunfire at the front of the bus. But he was hell-bent on getting us to safety and, somehow, he got us moving again. Had Khalil not acted with such courage and presence of mind most of us would have been killed,” Sangakkara acknowledged like a true sportsman.