Writing the obituary or a condolence note of someone who has been a dear colleague for decades is one of the most painful tasks to perform. Yet it’s a moral, if not necessarily official, duty of the surviving members of the fraternity to remember the deceased. 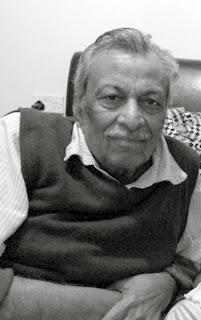 Afaq Ahmad, who began his career has a sports journalist and rose to the position of the News Editor of a famous daily, breathed his last, after a protracted illness, in his hometown Karachi on January 11. He was believed to be over 70.

Unfortunately the news of his death didn't find its way in the media circles and the only place where he was provided the due space was none other than Daily News for whom he had worked for a number of years before his retirement in the capacity of the News Editor in 2001.

Afaq Ahmad was suffering from the Chronic Obstructive Pulmonary Disease (COPD) for about three years. He was admitted to a private hospital in a critical condition on the morning of January 11 and he passed away later in the day.

His funeral prayer was offered the following day after Namaz-e-Asr at the Jaamia Masjid in Paposh Nagar, Nazimabad Number 5, and he was laid to rest in the Paposh Nagar graveyard. He had lived in Nazamabad for a number of years. He has left behind two children, a son and a daughter.

His wife, an educationist, had expired about a year ago. His son, Uzair Afaq, has played competitive cricket in Karachi before relocating in England where he continued his passion with the sport while pursuing higher education.

Afaq Ahmad remained associated with the media industry for over four decades. He had started his career as crime reporter in Morning News. He later joined Daily News, the largest circulated evening newspaper of the country, as a Sports Reporter where he was promoted to the post of the Sports Editor before being finally appointed the News Editor, a position he retained until his retirement.

Upon retirement from Daily News, he had a stint at Daily Business Recorder for a few years. He continued visiting the Karachi Press Club occasionally where he was able to touch base with many of his colleagues and contemporaries.

The death of Afaq Ahmad is another saddening blow to the local sports circles, having already lost the personalities like Dr Mohammad Ali Shah, Munir Hussain, Ahmed Mustafa, Razaullah Khan, Hasib Ahsan and Shamsuzzaman during the course of one year or so.

Afaq Ahmad, who was quite popular in the sporting arena in particular, played his role admirably in the promotion of sports. The sight of the weekly colourful sports pages of Daily News, which were also rich in content, pleased many eyes. The pages were usually punctuated with high quality action photographs which also helped in increasing the circulation of the newspaper.
readmore »»