Does a journalist or writers body come into being so mysteriously?

What a shame that the get-together on the evening of January 18 at Karachi Gymkhana was manipulated and exploited in such a horrible manner. A handful of cricket journalists and writers were invited verbally for an exchange of views over dinner.

The proceedings, lasting an hour or so, were conducted formally and there were relevant speeches to raise the issue of bringing back international cricket to Pakistan.

Every speaker, that included Arif Ali Khan Abbasi, Wasim Akram and Iqbal Qasim, had welcomed the idea of sharing views but there was no mention of any group or association getting formed there and not a single announcement to this effect was made during the meeting.

The subsequent announcement through a press release that a Cricket Writers (Journalists) Association was launched with an aim to serve the game loved by millions in Pakistan, has come as a bombshell to the community of working journalists who consider it as an act of dishonesty.

Every Tom, Dick and Harry has a right to form a group or association of his choice but nobody has a right to exploit the community or bring the profession to disrepute for personal gains.

Those seeking the formation of a cricket writers or journalists’ body should have had the courage of convening a proper meeting instead of doing it in such disgraceful manner.

Whatever their aims and objects, hidden or otherwise, they would need to follow the rules of the game if they are so fond of establishing an association of journalists, photographers and freelance writers even if it has only to be a forum to express themselves on a variety of topics, give suggestions for the improvement in the game and provide avenues to the budding cricketers. 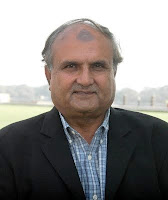 Announcing self-proclaimed President, Chairman or Secretary doesn’t serve the purpose. There’s also a feeling that quite of a few of the office-bearers whose name is included in the press release were not even consulted.

The fraternity of working journalists, passing the impression of being cheated, has condemned these actions of the people with vested interests who are trying to mislead others.

Arif Ali Khan Abbasi, a former Chief Executive of the Pakistan Cricket Board (PCB), while having appreciated the idea of discussing the issues concerning the management of the game didn’t mince words in expressing his reservations about the success of such a venture.

“They say the world over that nothing is permanent except change. Unfortunately in our country or society it takes ages for the critical changes to take place,” he regretted.

The observations of Arif Abbasi, who was also later mentioned as one of the patrons of the so-called body, certainly did make a lot of sense but one can never be sure if his consent was taken.
readmore »»