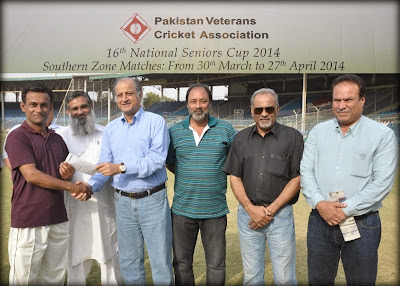 The tournament, being organized by the Pakistan Veterans Cricket Association (PVCA), was inaugurated by Nadeem Omar, Managing Director, Omar Associates (Pvt) Limited, who pledged his unstinted support for the promotion of the game at all levels.

Karachi Friends, who elected to bat after winning the toss, rattled up a huge score of 268 for two in the allotted 25 overs. Karachi Gold Bridge responded positively but lost wickets at regular intervals to be bowled out for 243 on the final ball of their innings.

The 176-run opening partnership, between Irfan Ali Khan and Azeem Ahmed, in a matter of 16.3 overs laid the platform for a massive total. Irfan was the dominating partner as he clobbered five sixes and 14 fours in his 110 off 65 balls while Azeem chipped in with 64 off 40 balls with the help of two sixes and nine fours.

The momentum was sustained by Farooq Ahmed and Anwar Baba, who added 78 runs for their unbroken third wicket stand in less than six overs. Anwar smashed three sixes and seven fours in his whirlwind unbeaten 52 off 24 balls while Farooq remained undefeated with 28 off 21 balls.

Skipper Syed Mukhtar Ahmed and off-spinner Ahsan Shakoor were the only wicket-takers for Karachi Gold Bridge whose bowlers went for aplenty.

The captain then led the charge as Mukhtar, who opened the Karachi Gold Bridge innings, smashed three sixes and eight fours in his swashbuckling 66 off 31 balls. The loss of quick wickets, however, derailed their progress and even the late onslaught from Mohammad Adil, who whacked two sixes and six fours in his 61 off 30 balls before being run out, was not enough to get them back in the game.

A record number of 108 teams from 58 cities are participating in the tournament, having been divided in 24 Groups. 35 city teams from Punjab, 13 from Khyber Pakhtunkhwa, eight from Sindh, three from Islamabad and one from FATA have entered the tournament with the national final to be played between the winning teams of North and South zones at Lahore on May 4.

The total prize money in the seven-week event, being sponsored by Arif Habib Corporation Limited and Omar Associates (Pvt) Limited, is Rs 805,000.
readmore »»