International sports returns to Pakistan with hockey series against China

China are not a superpower in the hockey arena yet but their recent tour to Pakistan attained great significance because it announced the revival of international sports activities in the country which seemed to have become ‘out of bounds’ for the visitors since early 2009. 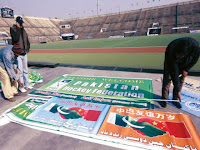 The Chinese hockey team opened their tour with the first couple of Test matches at the Hockey Club of Pakistan Stadium, Karachi, before moving on to Faisalabad and Lahore for the last two Tests against the Green-shirts.

The hockey Test series between the two nations could open the gate for resumption of other sporting events in Pakistan as well. Already there are indications that Bangladesh’s cricket team would be arriving here early next year.

So there’s every possibility of Pakistan playing host to quite a few nations in hockey and cricket in particular in the coming year. The entertainment-starved people of Pakistan are crazy about sports and they eagerly await revival of international contests in their own backyard.

International hockey resumed in Pakistan after a staggering gap of seven years when the Green-shirts took the field against China at the Hockey Club of Pakistan Stadium, Karachi, on December 21. The hosts celebrated the occasion by winning the first Test by three goals to nil. It was the first international hockey game to be staged in Pakistan after the 2004 Champions Trophy at Lahore.

Although the Chinese showed flashes of brilliance in all the four Tests they were unable to stop the Asian Games Champions from completing a clean sweep. 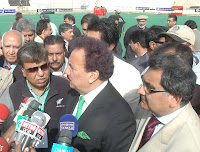 “It’s a historic day for Pakistani sports and I hope in coming years more foreign teams of cricket, hockey and other sports will be visiting Pakistan without any security issue,” Rahman Malik told the media corps after shaking hands with players of Chinese and Pakistani teams and officials.

“We are grateful to brotherly country China for sending their hockey team to Pakistan to resume international sporting activities here,” he commented.

The Interior Minister, who was appointed Patron of the PHF earlier this year, said that the government was very keen and making all-out efforts to bring international sports back to Pakistan after 2009 attacks on Sri Lankan cricket team in Lahore.

Meanwhile the Sindh Governor Dr. Ishrat Ul Ebad Khan, during his visit to Hockey Club of Pakistan Stadium the following day, announced the laying of a new blue astro-turf at the stadium to further boost the national sport.

"The Sindh Government will be providing funding for the new turf at the HCP replacing the current green turf which was laid here in 2004," he said after watching the second Test between Pakistan and China on December 22.
readmore »»