Nadeem Omar made the difference in PSL: Fawad Ijaz Khan


The Chairman of the Pakistan Veterans Cricket Association (PVCA), Fawad Ijaz Khan, has declared that Nadeem Omar, the owner of Quetta Gladiators, was the difference among the otherwise evenly matched six participating squads in the recently held fourth edition of the Pakistan Super League (PSL). 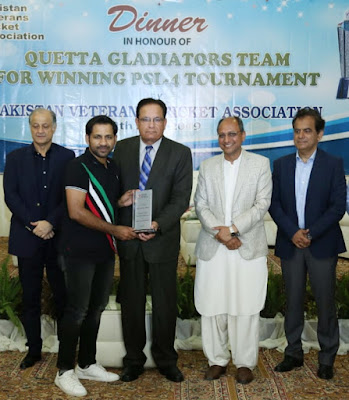 “His motivational qualities played the key role in guiding his team to title victory this time round after they had been edged out in the final two times in three previous editions of the PSL,” he observed during his speech in the dinner hosted at the Karachi Gymkhana on April 8 by the PVCA in the honour of Quetta Gladiators for winning the PSL-4.

“Each of the six teams contained power hitters and match winners. But it was the management skills and the incredible passion of its owner which tilted the tide decisively towards Quetta Gladiators,” the PVCA Chairman added.

Inspired by the terrific response from the spectators in Karachi during the PSL-4, urged the authorities to either build a new stadium or enhance the seating capacity of the National Stadium to facilitate the passionate cricket lovers of the most populous city of Pakistan.

Saeed Ghani, Sindh Minister for Local Government, Public Health Engineering, Rural Development and Katchi Abadies, who was the chief guest of the evening, acceded to the request of the PVCA Chairman and agreed to play his role in developing more cricket facilities in the metropolis. 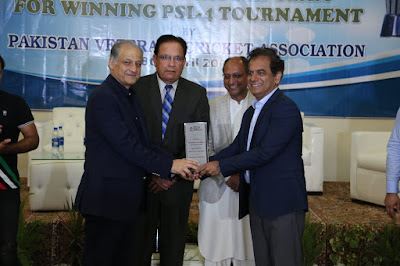 Encouraged by successfully staging the Karachi leg of the PSL, the Government of Sindh has agreed in principle in developing more facilities for fuelling the passion of the cricket-loving population of the metropolis.

Saeed Ghani confirmed the willingness of the provincial government to further play its role in the promotion of cricket, the number one sport of the country.

Sharing his thoughts candidly, the provincial minister talked about the hardships and the challenges faced by the provincial government in staging as many as eight matches of PSL-4 in Karachi without a single mishap. 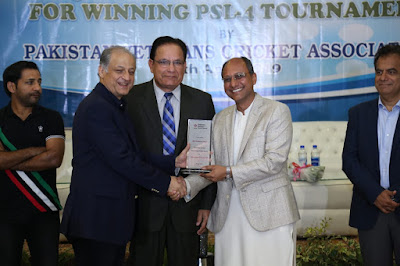 He complimented the law enforcement agencies and the city administration in particular for rising to the occasion.

The Commissioner Karachi, Iftikhar Ali Shallwani, also spoke about the organizational aspects of the PSL-4 and he acknowledged the support of all the stakeholders in making the event a big success.

Nadeem Omar, the owner of Quetta Gladiators and the President of the Karachi City Cricket Association (KCCA), attributed the recent triumph of his team in the PSL as a result of teamwork rather than individual brilliance.

“We have been firm believers of teamwork. We have been operating like an extended family all along and the results have been there for everyone to see. It’s little wonder that ours has been the most consistent side in the PSL even though many people felt that we didn’t have too many megastars in our ranks,” he observed. 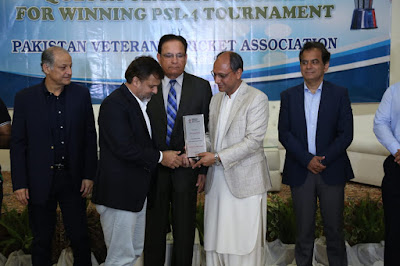 Nadeem Omar made special mention of his family members for having been involved with Quetta Gladiators with heart and soul to keep everyone motivated and inspired.

The Quetta Gladiators skipper, Sarfraz Ahmed, who is also the captain of Pakistan in all three formats, in his brief speech, thanked everyone in the team for having given their best to achieve the desired results.

Former Pakistan captain and now the head coach of Quetta Gladiators, Moin Khan, expressed similar views and he was even more appreciative of the role of the management and the support staff in the success of the team on the field.