Nawab Mohammad Yousuf Talpur, President, Pakistan Bridge Federation (PBF), and Member National Assembly (MNA), hosted a dinner-reception he hosted in the honour of the BFAME champions at his residence in Karachi recently. 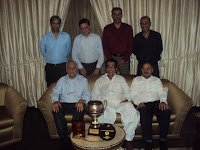 It turned out to be a wonderful get-together in which Nawab Yousuf Talpur, having taken over as the chief of the PBF just a few months ago, also had informal chat with the sports scribes covering the mind sport of bridge for a long time.

It was his first proper interaction with the bridge journalists after becoming the PBF President, although he had been speaking to them individually in the past as well.

He disclosed that Prime Minister Syed Yusuf Raza Gilani will soon be meeting the victorious national bridge team, who came up with stunning performance to annex the 16th Bridge Federation of Asia and Middle East (BFAME) Championship in Chennai, India, last month. 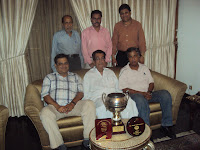 Rashid-ul-Ghazi, Tahseen Gheewala, Tahir Masood, Javed Ahmed Miran, Syed Hassan Jawwad and Hasan Askari with Tariq Rasheed Khan being non-playing captain and manager, it may be recalled, had prevailed over arch-rivals India to recapture the crown after 12 years.

“The Prime Minister has also approved a summary in which substantial funds have been allocated to the PBF for taking care of the costs to be incurred for sending our national team to the 2011 Bermuda Bowl World Championship to be staged at Veldhoven, the Netherlands, in October,” Nawab Yousuf Talpur revealed.

“The Prime Minister has congratulated each and every member of the team for having produced sensational performance to win the zonal title. Being preoccupied in the budget sessions presently, he has expressed the desire to meet the squad that brought home the glory in the very near future,” the PBF President added. 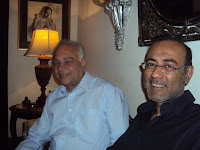 Nawab Yousuf Talpur, having succeeded Tariq Rasheed Khan, who retired after a second term at office, expressed his confidence over securing more governmental funds for the cash-starved federation.

He also hinted at the possibilities of holding an international tournament in Karachi later this year, provided the foreign teams agreed to come over for a few days to Pakistan.

“Let the mind sport of bridge benefit by my presence in the PBF. We have to put together our resources to generate funds and have a lot of activity. We have some plans which will soon be implemented,” he announced. 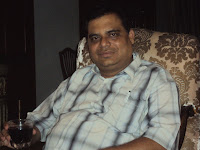 Tariq Rasheed Khan, who brought with him the trophy his team won in Chennai, shared the experiences there and described the tournament as a well organized one, crediting the hosts for the hospitality.

He attributed the success in Chennai to teamwork and looked forward to carrying the momentum to Veldhoven. He also acknowledged the support of the legendary Zia Mahmood that helped in motivating the team during the BFAME Championship.

With the sole exception of Javed Ahmed Miran, who’s presently out of country, all the other members of the victorious outfit attended the reception alongwith the PBF officials, Azwer-ul-Haq and Masood Mazhar and bridge stalwarts, Parvez Mirza and Shaheen Iqbal.
readmore »»