The West Indians, unlike the past, proved to be very generous hosts. There was a time, not many decades ago, when the visiting teams used to be fearful of going to the Caribbean for a number of reasons. Not only the hosts used to be a dangerous side but the entire environment over there was intimidating enough to keep the visitors under pressure nearly all the time. 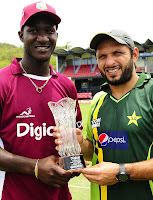 Pakistan have had successful tours of the West Indies even when playing in the Caribbean was the most challenging proposition. The teams led by Mushtaq Mohammad in 1976-77 and the one captained by Imran Khan in 1988-89 had overcome the pressures with true grit and resilience.

It’s quite amazing, however, how this inexperienced Pakistan outfit, with the enigmatic Shahid Afridi at the helm of the affairs, managed to win the series of five One-day Internationals in the West Indies.

In fact there must have been occasions when they must have even fancied their chances of whitewashing the hosts if they continued to take things so lightly. It was incredible how the West Indian Cricket Board was handling matters. They appeared oblivious of the fact that they had a duty to perform. I don’t think they have the license to do anything thing they like at the expense of the sport.

Cricket has been on the decline in the Caribbean for a long time but it will soon become a dead sport over there if their administrators continue having fun at the top. Whatever the reasons, wasn’t it a pity that the top West Indian stars were stealing the limelight in the Indian Premier League and the young ones with limited talents and experience were biting the dust back home.

Experimenting with youth at home is not a crime but discarding the seasoned campaigners for no rhyme or reason is criminal. You just cannot drop your experienced fellows on the basis an odd bad performance. Their reputation is not built overnight. They take years to mature. Throwing them out when they still have plenty to offer and their replacements are not there has to be branded as poor management.

Shahid Afridi and his boys must have been pleasantly surprised to find that the hosts would prove so soft. The West Indians, with meager resources at their disposal, were guilty of not applying themselves and the series was decided after the first three games.

The manner in which the West Indian batsmen handled the Pakistan spinners showed they were not prepared for international cricket yet. The home bowlers were short of confidence and experience as well which allowed the series to be settled so quickly.

As it turned out in the last two games, the West Indians could have kept the series alive much longer had they displayed some belief in the first three encounters in which they had batted very poorly indeed.

The West Indies salvaged some pride by winning the last two games to make it 2-3 which also made them realize that they could have pocketed the series quite comfortably if they showed little more discipline and firepower.
readmore »»