A total of 32 teams, including eight government schools, will be participating in the 9th PVCA/EBM Inter-School Cricket Tournament 2018 being organized by the Pakistan Veterans Cricket Association (PVCA) and sponsored by English Biscuit Manufacturers (Pvt) Ltd (EBM), the manufacturers of Peek Freans Biscuits. 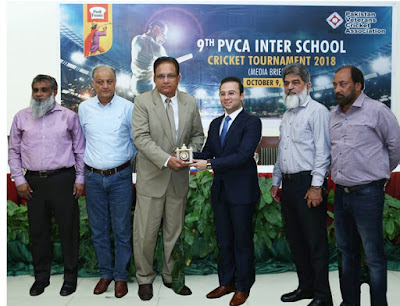 The details about the tournament, to be spread over a couple of months during which a total 55 matches are scheduled to be held, were unveiled in a media briefing by Fawad Ijaz Khan, Chairman, PVCA, Nadeem Omar, President, Karachi City Cricket Association (KCCA), and Shahzain Munir, Director, New Product Development, EBM, at the Karachi Gymkhana on October 9.

Ijaz Faqih and Sadiq Mohammad were the Test cricketers present on the occasion alongwith officials of the PVCA, functionaries of the sponsors and representatives of the participating schools.

It was announced that the tournament will be inaugurated by Younis Khan, a former Pakistan captain, in a colourful ceremony at the Karachi Gymkhana Cricket Ground on October 11 and it will be followed by the opening match between Falconhouse Grammar School and St Paul School.

Fawad Ijaz Khan, in his speech, shared the role of the PVCA in the promotion of cricket at the grassroots level, as the association was now holding ninth edition of the Inter-School Tournament in Karachi, having launched it in 1999.

“We had conceived the Inter-School tournament on the pattern of the Ruby Shield, which used to be the premier tournament of its kind and it’s still talked about with great awe. We have been successfully holding it after every two years but now it’s our goal to organize every year,” the PVCA Chairman stated.

He noted with satisfaction that the present Pakistan captain, Sarfraz Ahmed, and the current internationals like Asad Shafiq and Anwar Ali were products of the Inter-School Tournament, launched by the PVCA.

He complimented Khawar Masood Butt, Chairman of EBM’s Board of Directors and a former cricketer, for having joined hands with the PVCA and assuring long-term support to school cricket.

Fawad Ijaz Khan hoped that both the semifinals as well as the final of the 9th PVCA/EBM Inter-School Cricket Tournament 2018, to be telecast live nationally and internationally, will be staged at the National Stadium, Karachi, as was done previously.

“We have an understanding with the Pakistan Cricket Board (PCB) that the National Stadium will be made available to us if the ongoing maintenance work for the Pakistan Super League (PSL) was completed earlier,” he added.

Meanwhile the PVCA, with an eye on promoting the game in every segment of the society, has made greater efforts to facilitate the government schools.

“We have not only ensured the participation of eight schools in the tournament but we have also arranged for them kits and gears free of cost,” the PVCA Chairman disclosed.

Nadeem Omar, President, KCCA, paid glowing tribute to the functionaries of the PVCA on organizing the Inter-Schools Tournament in Karachi for the ninth time in 18 years.

“It’s quite an extraordinary achievement by all standards. Full credit is due to Fawad Ijaz Khan and his team for having worked with missionary zeal over the years. They have performed momentous task,” the KCCA President applauded.

Nadeem Omar didn’t mince words in stating that the PCB, utilizing its resources and outreach, should take the responsibility of organizing Inter-School tournaments all over the country on a regular basis.

“The youth of the country needs to be motivated towards cricket and other sports. More playgrounds are needed to be developed on an urgent basis and sports must be developed from the grassroots level,” he reckoned.

Shahzain Munir, Director, New Product Development, EBM, welcomed the initiative of the PVCA of holding Inter-School Cricket Tournament, indicating that his company would be willing to sponsor it in future as well.

“EBM, founded in 1966, has been supportive of sports and other healthy activities since its inception. We have been promoted cricket at all levels over the years and we are prepared to extend the sporting legacy of its founder Khawar Masood Butt, who had played for Pakistan Eaglets against England in 1954,” he declared.

Meanwhile the participating teams of the 9th PVCA/EBM Inter-School Cricket Tournament 2018 have been divided equally in eight groups.

At the end of the league matches, the leaders of all the eight groups will be advancing to the knockout stage of the competition, starting with the quarter-finals on November 26. The semifinals on December 14 and 15 will be followed by the final on December 16.
readmore »»