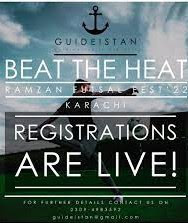 As many as 40 outfits, having both men and women, would be seen in action in the three-day Futsal competition which commences at the Cedar College, DHA Phase-VIII, in Karachi on April 23.
According to the details shared by the organizers there would be participation from various schools, colleges and universities with the age group of 15 years and above allowed to take part in the event.
The prize money of the Futsal competition, being organized by Guideistan, will be Rs 120,000 and it will be distributed among winners and runners up.
The officials of Guideistan, Tariq Baloch, Hassaan Sohail and Faiz Bukhari, expressed their desire to promote healthy activities among the youth so that they could become good citizens and contribute to the betterment of the country. They hoped sporting spirit to be displayed during the three-day festival.
readmore »»