Shoaib Ahmed Siddiqui, Secretary Youth Affairs to the Government of Sindh, inaugurated the Journalists Challenge Cup Cricket Tournament 2013, being organized by the Karachi Union of Journalists (KUJ), at the Karachi Press Club (KPC) on February 24. 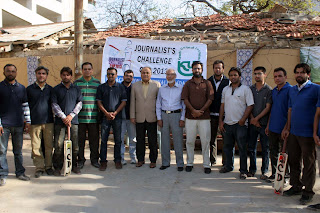 In his brief speech on the occasion, Shoaib Siddiqui recognized the initiatives of the KUJ and the KPC for the promotion of sports and urged them to hold more similar events for the recreation of their members.

Afzal Mohsin, President, KUJ, stated that the media fraternity, like rest of the country, was also passionate about cricket and they were hoping to make the Journalists Challenge Cup an annual feature.

In the exhibition match, played to celebrate the inauguration of the event, Court Reporters defeated Daily Nai Baat by three runs after an exciting contest.

The draws of the tournament, to be played on knockout basis, will be taken out in the presence of the representatives of the participating teams on February 26 while the matches will be played under floodlights on March 2 and 3.
readmore »»