Mubashir Nawaz’s rare double of a century and three-wicket haul went in vain as Al-Fatima School edged out The Educator School by one wicket in the nail-biting Group D tie of the Omar Trophy Inter-School Cricket Tournament 2016, being organized by the Pakistan Veterans Cricket Association (PVCA), at the KCCA Stadium on September 28. 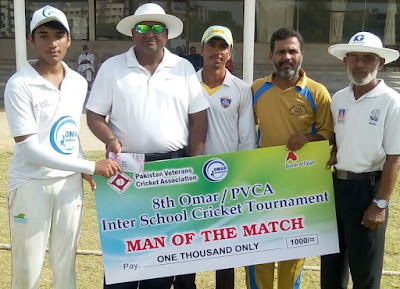 But it was the contest between Al-Fatima School and The Educator School which produced the most absorbing battle and the best all-round individual performance yet during the competition.

Opener Mubashir Nawaz stroked 11 boundaries in his superlative knock of 109 off 108 balls to enable The Educator School install a respectable total of 199. He fought a lone battle against the Al-Fatima School bowlers as the innings was dented by off-spinners Waqas Ansari (4-42) and Fahad Ali (2-25) besides medium-pacer Kafeel Khan (2-26).

Chasing a target of 200 in 40 overs, Al-Fatima School got off to a cracking start through the opening pair of Kamal Khan (50 off 50 balls) and Kafeel Khan (28 off 37 balls), who added 79 for the first wicket in quick time. It was the leg-spin of Mubashir Nawaz (3-34) and Zaid Bin Haris (2-29) which brought The Educator School back in the game.

Fierce battle ensued between bat and ball ensued in the final phase even after a cameo from Syed Hunail (36 off 23 balls) and the outcome remained in doubt until the last pair got Al-Fatima School over the line. The consolation for The Educator School was Man of the Match award for Mubashir Nawaz.

Opener Mohammad Usman’s brilliant 89 off 88 balls with the help of one six and 11 fours alongwith useful contributions from Basit Kaleem (44 off 26 balls), Sharjeel Ahmed (30 off 16 balls) and Exxon John (30 off 46 balls) allowed St Patrick High School to post an impressive total of 258 for eight in 40 overs against Behbud Boys Secondary School.

St Patrick High School’s all-rounders Sharjeel Ahmed (4-19) and Mohammad Usman (2-30) also starred with the ball to send Behbud Boys Secondary School tumbling to 163 all out in 30.1 overs with none of the batsmen getting past 30. Mohammad Usman was adjudged Man of the Match.

Set a target of 197 in 40 overs, Khan Secondary School’s innings couldn’t gain momentum after both the openers were removed early by medium-pacer Adnan Khan. The pressure was sustained by left-arm spinner Abdul Mannan (3-24), who was declared Man of the Match, and off-spinner Shoaib Roz (2-34). Rashid Khan’s 38 off 34 balls with the help of one six and four fours briefly revived Khan Secondary School’s hopes before they were bowled out for 153 in 36.1 overs.
readmore »»