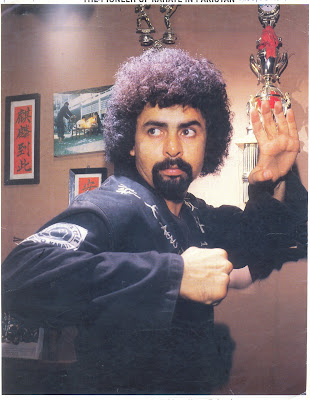 Famous martial artist, Grand Master Mr. Muhammad Ashraf Tai had introduced Bando, the Burmese style of martial arts, in Pakistan way back in 1971 but it were his accomplishments against top-notchers which earned him fame and recognition. He has become a martial art icon in the country and a large number of his students have spread his mission in different countries of the world making him an internationally renowned figure.

Grand Master Ashraf Tai had created a sensation by overpowering Stanley Michael of Malaysia in the final of the Afro-Asia Championship in 1978. He had confirmed his superiority in the continent by outwitting Japan's Koha Yash a year later.

After emerging triumphant in a tournament staged in Sri Lanka in 1980, he dared fighting the reigning world champion, Don Wilson of the United States, in 1981. The creditable performance against the world champion elevated his ranking to the ninth place in the world.

Grand Master Ashraf Tai then founded the Pakistan Karate Federation (PKF) and succeeded in having the body affiliated with the Pakistan Olympic Association (POA) as well as the Pakistan Sports Board (PSB).

Having received numerous awards in various continents of the world during his illustrious career, he was declared the International Grand Master of the Year in 2000 by an institution based in the United States.

The Tai's Bando Karate Centre, founded by him in 1971, has already trained thousands of martial artists. The branches of his centres have not only been functioning with great success all over the country but the students trained by him have also been operating the centres named after him in quite a few countries like the United States, England, United Arab Emirates (UAE), Saudi Arabia, Afghanistan, France, Holland and Bangladesh.Grand Master Ashraf Tai, was conferred the coveted Pride of Performance award by the then President General Pervez Musharraf.

The pioneer of Bando in Pakistan, Grand Master Ashraf Tai holds the distinction of claiming the highest degree (8th Dan) in the martial arts history of the country. Only a handful of martial artists have matched his feat worldwide.

He had started karate at the age of 9 with my master Lee Phow Shin. He got his black belt at the age of 16. He started participating in a lot of local tournaments, most of which were professional.