Posted by Syed Khalid Mahmood at 10:12 AM .
0 comments
Labels: I-Lead
By Syed Khalid Mahmood
I-Lead, a joint venture of the Habib University Foundation and the Ministry of Youth, Government of Sindh, looks an ambitious project at the takeoff stage. The launch ceremony at the Habib Public School on July 14 allowed the two partnering organizations to share the salient features of the programme with an audience that comprised of brilliant young athletes, sporting icons, seasoned sports journalists and stakeholders in the sports administration. 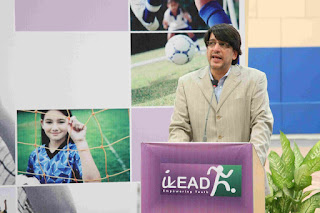 The panel discussion featuring the sporting greats was to be the showpiece event of the launch ceremony and it indeed was but the lively presentation by Syed Wasif Rizvi, Chief Executive Officer, Habib University Foundation, was no less brilliant. In fact the presentation was a perfect prelude to the panel discussion.
So the I-Lead project was actually launched with Wasif Rizvi’s presentation on Value of Sports and Physical Education for a Society. The wealth and depth of knowledge on sports possessed by the presenter allowed him to keep the audience involved in the proceedings and trust me there was not a single dull moment in it although the topic he was speaking on was rather dry.
A couple of things stood out in the presentation. One was the well-drafted script rather the resource material using their definition. Secondly it was the wonderful delivery punctuated with anecdotes.
It’s never a straightforward task keeping the audience involved or absorbed while describing the stuff that’s not very exciting or entertaining. That’s one of the reasons why very few lecturers, professors or teachers are remembered by the students.
Even the presenters well versed with the art of keeping the audience glued to their seats occasionally lapse when confronted with a subject not having much recreational value. So hats off to Wasif Rizvi for having taken the responsibility of doing the tough job on behalf of his team and rising to the occasions. This was a classic example of leading by example.
Now let me turn to the presentation itself in which I-Lead was explained as Inspiring Leadership, Empowerment and Development in Youth Collectivism and Sharing and Togetherness. It was pointed out that Broadening Horizons from Healthy Individuals to Healthy Society was the objective.
Wasif Rizvi threw light on the usual perceptions of sports. He described the virtues of playing sports. He very rightly observed that sports is more than useful tool for enhancing national unity and he cited the recent example of Pakistan’s triumph in the ICC World Twenty20 event that resulted in celebrations in every nook and corner of the country with every segment of the society, not necessarily enjoying the most cordial of relations at other times, took out to streets to share the moment of glory together. 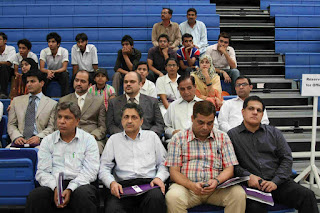 He spoke about sports bringing sense of belonging, pride and commitment. He believed that sports provided a way to promote sense of a cohesive community and it was a mean towards active lifestyle.
Wasif Rizvi made the point that sports was a medium to learn life skills with the athletes getting the opportunity to come across teamwork, goal setting, hard work, sense of responsibility and conflict resolution. He added that sports was also a medium to attain emotional maturity as one learnt winning and losing being the part of the game.
He emphasized that sports was a tool to revive the spirit of a healthy society among youth with 4Es, Educate, Engage, Enlighten and Empower.