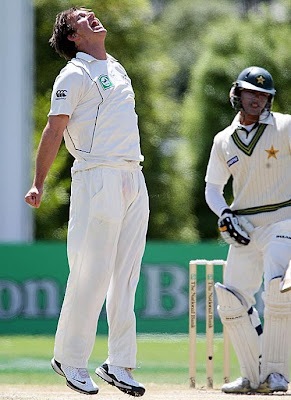 The injury to the New Zealand fast bowler, Shane Bond, who was named Man of the Match in the first Test in Dunedin, has opened the floodgates for Pakistan who could now breathe much more easily and think quite positively in terms of turning it around.

Bond, who bowled with great fire and accuracy to guide his team to a thrilling victory in his comeback Test, has now been ruled out of the rest of the series due to a torn abdominal muscle.

While Pakistan were struggling to finalize their batting line-up for the next couple of Tests following the debacle in Dunedin, the injury to Bond must have relieved them tremendously because he was the bowler most likely to continue troubling them.

There was a fierce debate back home how the batting order should be reshuffled to counter the threat of Bond and company but the ouster of the premier fast bowler has rendered all such discussions meaningless.

Neither Daryl Tuffey nor Tim Southee, the likely replacements for the injured spearhead, create that kind of psychological pressure that Bond did primarily due to his pace and the ability to lift the ball from good length.

Chris Martin and Iain O'Brien, who are most likely to retain their place in the playing eleven for the second Test, didn’t look all that menacing in Dunedin and the Pakistan batsmen didn’t have problems in negotiating them even in conditions that were not ideal for batting.

Both these fast bowlers were also among the wickets as was skipper Daniel Vettori but there cannot be two opinions about the fact that it was Bond who did the damage to create opportunities for his side.

It became evident sooner than later when Bond was done with his superb spell that rocked the top-order in first innings. Debutant Umar Akmal was extremely fortunate to get away with not one but two catches in Bond’s another sensational over.

It was a different ball game when Bond was taken out of the attack. The Akmal brothers chanced their arms and punished every bowler that Vettori tried. The big partnership revived Pakistan and it was Bond again who ensured that New Zealand still got a first innings lead.

New Zealand, not surprisingly, collapsed in their second innings after being in a position from where they could have dictated terms. In the end they were left with a modest target to defend and their fate then depended entirely on bowlers. 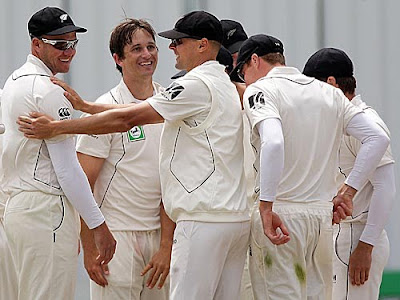 I think Pakistan would have easily got to the target of 251, had Bond not been there. He was the man who looked the most threatening and he rose to the occasion in what went on to become a very close contest.

It’s a pity from New Zealand’s point of view that they have been denied the services of their most lethal fast bowler for quite sometime. It’s really sad that Bond has broken down again after playing his first Test in two years.

He is reported to have suffered minor abdominal discomfort following the Dunedin Test and the scans revealed a one-centimetre tear in an abdominal muscle forcing his withdrawal from the second and third Tests as a precaution.