Rotary International, one of the leading voluntary service organizations of the world, has been joined by Shahid Khan Afridi, Pakistan’s former captain and one of the most popular cricketers, in the Polio Eradication Campaign. 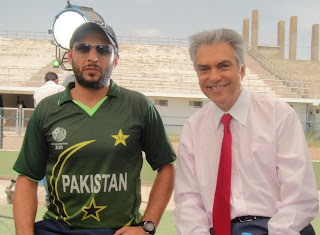 The FATA-born Shahid Afridi, who is also famous with his nickname of Boom Boom, has agreed to become a brand ambassador for the Rotary International’s National Polio Plus Committee.

Aziz Memon, Chairman, Rotary International’s National Polio Plus Committee, was excited to have Shahid Afridi, who is the heartthrob of millions of people, on board.

Shahid Afridi, an enterprising all-round cricketer who has remained a crowd-puller all along, has agreed to be a brand ambassador of Rotary International and the formal agreement in this regard will be inked shortly.


“Being ethnic Pashtun, he will be especially instrumental in influencing high-risk groups in the regions of Khyber Pakhtunkhwa and Federally Administered Tribal Areas (FATA) He is a sporting icon who enjoys massive popularity. We are looking forward to roll-out communications campaign prior to the July polio rounds,” Aziz Memon, who has also been the Governor of Rotary International’s District 3270 covering Pakistan and Afghanistan, reckoned.

“By joining hands in a noble cause Shahid Afridi has once again proved that he cares for the community. He brings smiles on their faces with his aggressive intent in the cricket field. He will be featuring in our polio ads free of cost,” Aziz Memon, who himself played the lead role in roping in the dashing cricketer, disclosed.

“We already have had photo-shoots and video recording at a cricket ground in Karachi. Shahid Afridi has given his message in Urdu as well as Pushto, urging the people to cooperate with the vaccination teams so that every child could be administered polio drops without hassles,” the Rotary leader added.

“His appearance in the polio ad will surely get huge mileage because of immense popularity, particularly in the Pushto-speaking areas. Last year 79% of the polio cases came from Pushtoon families. We are confident that Shahid Afridi’s cricketing credentials will come handy in eradicating polio from this region,” Aziz Memon hoped.

“We are trying our level best to eradicate this deadly disease from Pakistan and we are mobilizing all our resources to do it as soon as possible. The Rotarians alongwith all other stake-holders are on board to kick polio out of Pakistan,” he emphasized.

The NIDs have been completed in Killa Abdullah, Pishin and Quetta districts in Balochistan and the second phase of the staggered NIDs was carried out in Peshawar district of Khyber Pakhtunkhwa where a Vaccination passage, as per short interval additional dose strategy, has also commenced in Nowshera and Lakki Marwat districts.
readmore »»