Twenty year old Ahsan Parvez made it and set a record by winning 4th position in senior 65-Category Mr Lahore bodybuilding competition organized by the Pakistan Body Building Federation at the famous Al-Hamra Hall in Lahore. 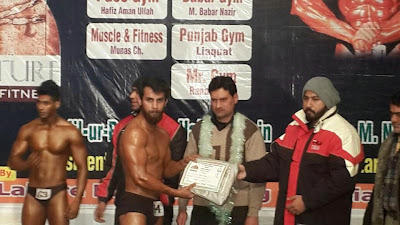 “It was my dream to become a body builder, and I have achieved it now”, the promising youngster stated while talking to the media.

Born and raised in the historic city of Lahore, Ahsan, said that he has already started preparations to participate in the Mr University Competition due to be held a couple of months later.

A fourth semester software engineering student at the University of Lahore Ahsan remarked that he loved his country and city very much.

“Since my early childhood I had an inclination to become a bodybuilder whenever I saw Arnold on my television set and I felt right at the core of my heart that I can emulate him,” he stated

“I dreamt of being a perfect bodybuilder by seeing modern western world as it was portrayed in movies and international body building championships competition,” Ahsan added.

He disclosed having started workout two years back when he was 18. Although it was a tough undertaking for him, his fierce determination to succeed enabled him to stay focused and achieve his goal.

He said that his studies did not come in the way and he is confident that if he claims a position in the Mr University Competition, he will be able to concentrate more on his scholastic activities and hopefully also get scholarship from the university as he already is the topper of his batch.

He said he worked out really hard at the fitness centre, Muscles and Fitness, owned by most respected personality of Pakistan Bodybuilding Federation, Mounas Choudery.

“He always had faith in me and always encouraged me by saying that you can do it. He is my true inspiration my coach,” Ahsan acknowledged.