Tendulkar should go now for sake of Indian cricket


There has been a fierce debate lately if Sachin Tendulkar should retire immediately, following his dismal performance in the recently concluded Test series against New Zealand at home, or should he continue playing until he himself decides to hang his boots. 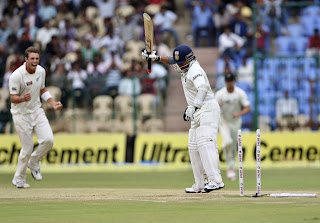 The debate about Tendulkar’s retirement is nothing new but there’s some difference for sure now. Unlike the past it are the Indian cricket fans, not only the media or the former greats, who desire the holder of so many world records to quit the game now.

I think they have a point now. The future of the Indian cricket should not be compromised on sentimental grounds. Tendulkar, who will turn 40 later in the season, has had enough.

He should follow the example of Rahul Dravid and VVS Laxman both of whom have left the scene voluntarily, after having won more matches for their country in lesser outings than Tendulkar.

Tendulkar holds many records which are unlikely to be broken. He has far too many runs in Tests as well as One-day Internationals than any other individual in either format. So is the case in the number of centuries. 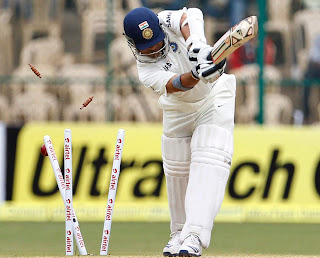 Not meant to take any credit away from him but in comparison Dravid and Laxman were instrumental in winning more matches for India than Tendulkar has been able to do in an international career in the third decade now.

He has been playing international cricket since 1989-90 while Dravid and Laxman entered the arena much later.

The spotlight had been on Tendulkar due to his awesome frequency of runs and centuries but how many of them helped the cause of his team remained debatable.

Tendulkar’s technique and temperament allowed him to stage a forceful comeback after odd lean patches. But his inability to contribute for the team in the crunch situations disappointed his fans in particular. He was unable to steer his struggling side to safety in the last away series in England and Australia where India were defeated in all eight Tests despite his presence. 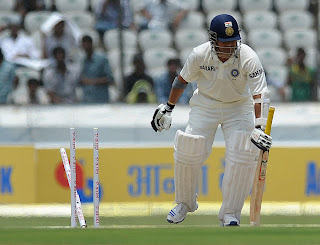 That trend continues even today. India appear more likely to win a game when he doesn’t fire rather than the ones in which he scores heavily.

The recent two-Test series against New Zealand was just an addition to that list. He failed in both the Test matches with India emerging triumphant at Hyderabad and Bangalore.

India have eight more home Tests to play this season, four each against England and Australia. If he doesn’t step down voluntarily, I don’t think the selectors would be able to drop him on the basis of his huge reputation.

The Board of Control for Cricket in India (BCCI) may be the most powerful body in the business but even they don’t seem to be having the muscles of thinking in terms of replacing Tendulkar with a promising youngster in the home Tests.

Tendulkar could be good enough to score some runs in home conditions but to expect him to do it in the challenging environment of South Africa and other countries where the pace and bounce demand quick reflexes, besides technique, is too big a risk.
readmore »»