Shahid Aftab, an accomplished cueist from Faisalabad, is set to become 16th Pakistani to participate in the World Snooker Championship which celebrates its golden jubilee this year. 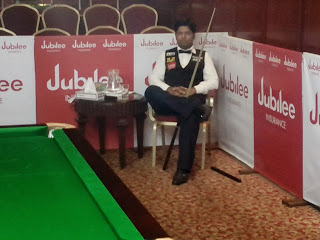 Mohammad Yousuf and Mohammad Asif are the only ones to have captured the world crown. Yousuf achieved this feat at Johannesburg, South Africa, in 1994 while Asif emulated him 18 years later at Bulgaria, Sofia.

Asif will be defending his title in the 2013 IBSF World Snooker Championship to be staged in Daugavpils, Latvia, from September 27 to December 8. He will be accompanied by Shahid Aftab and Imran Shahzad as Pakistan will be fielding three entries this time round because of him being the holder. Shahid has made the cut by having emerged triumphant in the Jubilee Insurance 3rd Ranking Snooker Championship 2013 at the Karachi Sheraton Hotel on September 26. He has now become the top ranked cueist of the country.

Imran, who made his international debut at Korat, Thailand, in 2007, will be making his fourth appearance in the World Championship, having also participated at Damascus, Syria, in 2010 and at Bangalore, India, the following year.

Asif, who won the National Championship in 2009, made his debut in the World Championship later the same year at Hyderabad, India. He missed the action in the global event in 2010 but returned to represent the country in 2011. He then rewrote history by winning the world crown at Sofia, Bulgaria, last year.

Yousuf had been participating in the World Championship every year since 1988. After winning the title in 1994, he appeared in the 1995, 1996, 1997, 1998 and 2000 editions of the premier amateur event. Still active in the national circuit, he has had the distinction of playing in exactly a dozen editions of the World Championship, which is the Pakistan record for the highest appearances. He also holds the record of winning the National Championship on the highest number of occasions. Saleh Mohammad, who has now emigrated to Afghanistan, represented Pakistan in as many as 11 editions of the World Championship from 1993 to 2004. He could have surpassed Yousuf’s record if the event was not scrapped in 2001 and 2005. He had come closest to claiming the world title in 2003 when, after winning the earlier 14 games on a trot, he was downed in the final by Pankaj Advani of India at Jiangmen, China.