A superb exhibition of fast bowling from Jerome Taylor sent England crashing to 51 all out on the fourth afternoon of the first Test at the Sabina Park, Kingston, which the West Indies managed to win by an innings and 23 runs.

It was one of the greatest bowling spells of all time that changed the complexion of the game within a matter of minutes. It prompted an extraordinary buzz at the ground that had been non-existent on the Caribbean islands for such a long time.

Cricket came alive during the course of that magnificent spell of nine overs from Taylor during which he claimed five wickets for 11 runs. At 26 for seven England were in danger of being bowled out for the lowest-ever score in Test history. The last three wickets could have tumbled within the next few deliveries had Taylor retained some more energy to go for the kill.

The withdrawal of Taylor from the attack enabled England to very nearly double their score with Andrew Flintoff delaying the inevitable.

There was hardly any hint of any such drama to follow when England had gone to lunch at 11 for two in their second innings, adrift by only 63 runs.

But what happened after the resumption was truly sensational. The crowd at the Sabina Park that had been quiet for the past three days when they mostly watched absorbing stuff suddenly came to life when Jerone Taylor sent the off-stump of Kevin Peitersen for a walk.

Having topscored in England’s first innings with 97, Pieterson was beaten by pace when he missed the attempted flick and had to watch his off-stump cart wheeling for the next few moments.

It was the defining moment of the game. The celebrations began with his dismissal and they continued unabated until the final wicket was taken. There was tremendous excitement with every ball and one was reminded of the 1980s when the West Indian cricket team ruled the world.

The memories of the good old days of the West Indian cricket were revived. It was after ages that they had played such aggressive cricket to force their opponents to submission so decisively. 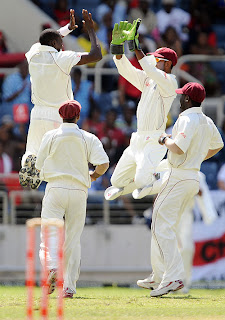 The spectators, as they used to do in those glorious years, were completely involved in the proceedings, expecting something to happen every ball. They were dancing, cheering and gossiping as England kept losing wickets at regular intervals to add fuel to the fire.

Jerone Taylor was the man of the moment. Operating at around 90 miles an hour his every ball was bang on target, attacking the stumps and giving the batsman no respite. He hardly bowled a loose ball in the spell, not giving any width nor pitched anything on the leg-stump. It was superb exhibition of sustained fast bowling.

The credit was also richly deserved by the young left-arm spinner Sulieman Benn who did a great backup work while Taylor was busy castling the batsmen. The left-armer not only dried the runs but also picked up wickets to create more pressure on the batting side. He picked up four wickets in each innings to emerge as the joint highest wicket-taker in the game alongwith Taylor.

Cricket after all is a team sport. It was an incredible victory and the West Indians may not forget it for a long time.