Life is a great leveler for Collingwood

Paul Collingwood was fuming only the other day when England had been cruelly victimized by weather to lose the game against the West Indies. The Nature obliged the heart-broken skipper within 24 hours and the showers opened to prevent him from a possible embarrassment against Ireland. 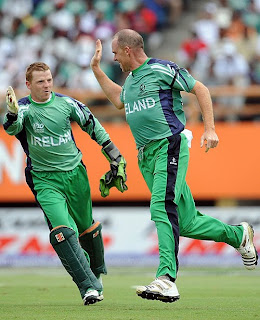 Ireland, not England, would have made it to the Super Eight if they successfully chased a modest-looking target of 121 in 20 overs. It was the kind of total that needed just one or two of the Irish batsmen to get going and complete the job which made them the favourites to win the encounter at the start of their innings.

Ireland, who had performed the giant-killing act in the Caribbean three years ago during the World Cup, again appeared poised to rewrite history only to be denied by the fickle weather of Guyana.
They had bowled and fielded remarkably well to contain the England batsmen who had shown so much of guts while tearing apart the West Indian attack at the same ground just the other day.
Ironically it was an Irishman, Eoin Morgan, who held the England innings together with 45 off 37 balls. The left-hander demonstrated his growing stature by putting his head down and cutting down the risks while getting the odd boundaries.
Now it was the turn of Ireland to mourn. It was more painful for them that it was for England in the game against the hosts because it was a do or die fixture for both the teams.
William Porterfield was convinced that his side could have reached the target. "The attitude we took out into the field there was brilliant. We just wanted to get into Super Eights and beat the big teams in there. We came with our sights set on that, and showed glimpses in our performance that we could do that. The way we came out today, after Friday's disappointment, was great. If we can take that into every game, we'll go places,” he pointed out.
Collingwood must thank his stars that it continued raining and Ireland didn’t get the opportunity to resume their innings. The lady luck was certainly smiling on him tonight after having deserted his team the other evening.
"We were looking at all the different scenarios, at one point we were about to go back on and it would have been 19 in 10 balls or something like and it was like here we go again. You just don't want those situations where a couple of edges can go their way,” a relieved Collingwood remarked. 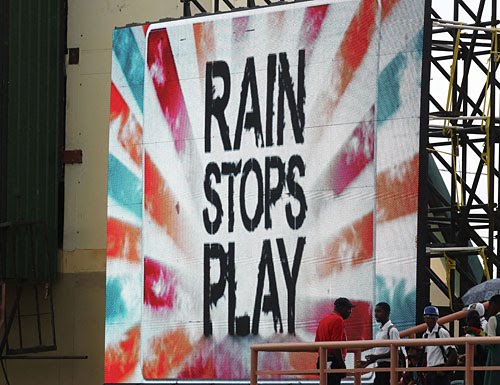 "Either it comes and washes it out or we get the full 20 overs in because when you have 10 wickets in the hutch and it gets reduced it certainly comes more into their favour. I guess the rain has come at a time that it's got us through to the next stage so it's helped us a little bit," he admitted.
Collingwood described Morgan as a very versatile player who can not only play all the shots but he's also got a good mind on him that is what you need in the middle order especially at number five.
readmore »»