All-rounder Asad-ul-Haq powered Springfield School into the semifinals of the Omar Trophy Inter-School Cricket Tournament 2016, being organized by the Pakistan Veterans Cricket Association (PVCA), as they knocked down the defending champions, Beaconhouse School System, by 46 runs in the quarter-finals at the Naya Nazimabad Lawai Stadium. 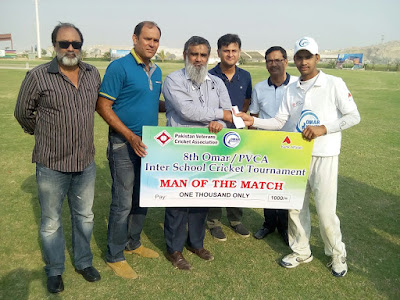 The quarter-final round came to an end with this match with Springfield School, Fahad Academy, Qadri Public School and Kamran Public School having advanced to the semifinals, scheduled to be held at the National Stadium, Karachi, next week.

Put into bat by the Beaconhouse School System skipper, Ammar Iqbal, Springfield School overcame a shaky start to reach a competitive total of 177, getting bowled out on the final ball of the innings.

The recovery was led by Asad-ul-Haq, whose counter-attacking 40 off 33 balls with the help of eight boundaries shifted the pressure on the bowlers. Mubashir Ahmed (28 off 33 balls), Badar Qureshi (26 off 52 balls) and Syed Ali Nasim (25 off 42 balls) chipped in with useful contributions to keep the scoreboard ticking.

Chasing a target of 178 in 40 overs, Beaconhouse School System got a decent start through the opening pair of Haris Bin Tahir and Zeeshan Iqbal, who added 41 for the first wicket in quick time.

Zeeshan Iqbal departed after scoring 24 off 19 balls with the help of one six and four fours but Haris Bin Tahir stayed at the crease much longer, striking one six and six fours in his 60 off 82.

Things, however, started to happen with the introduction of spin, as left-armer Badar Qureshi, after breaking the opening partnership, got another couple of wickets in his eight-over spell, yielding 33 overs. The other left-arm spinner, Asad-ul-Haq, bowled even better, returning the figures of three for 20 off eight overs.

Off-spinner Mubashir Amin and leg-spinner Syed Ali Nasim also chipped in with a wicket each as Beaconhouse School System was bowled out for 131 in 33 overs, losing their last eight wickets for only 28 runs.
readmore »»