Posted by Syed Khalid Mahmood at 11:08 AM .
0 comments
Labels: Pak vs Aus
By Syed Khalid Mahmood
The United Arab Emirates (UAE) have witnessed quite a few famous conquests of the Pakistan cricket team over the years. After Sharjah and Abu Dhabi, it was the turn of Dubai to provide the perfect settings for them. 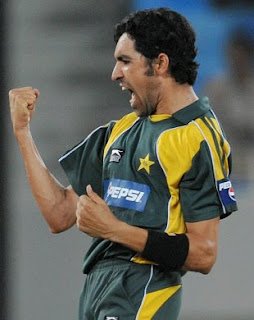 No wonder the Pakistan cricket authorities would desire hosting their ‘home’ Tests also in the UAE where they could find the environment more homely than anywhere else.
The one-off Twenty20 International between Pakistan and Australia at the Dubai Sports City Stadium on May 7 was yet another example of a fancied team biting the dust against all odds.
The Australians were whacked by seven wickets which was their second successive defeat against Pakistan in T20 International, after having suffered fate in inaugural the World Twenty20 in 2007.
Generally you don’t expect a team having collected 40 runs in the first four overs without losing any wicket to be bowled out for little over 100. Similarly there are very few examples when the change bowlers do the business after the premier bowlers have been hit out of the attack.
The Australians have been known for their grit and determination. They have been the team to beat in any form of the game for the past many years. The manner in which they collapsed was, therefore, mind-boggling to say the least.
It was not the way the Aussies play their cricket. Their state outfits are supposed to be so well-knit and trained but their national team passed the impression that they were a bunch of novices.
Shane Watson and Brad Haddin, who opened the innings, had provided Australia the start they needed to build a formidable total. The score was 42 without loss at the end of four over and one thought that the foundation had been laid for an onslaught by the efficient middle-order, well versed with the demands of T20 cricket.
A total in the region of 180 to 200 was being talked about after Shoaib Akhtar and Sohail Tanvir, the new ball operators, had been put to sword in their first couple of overs. Enter Umar Gul and the complexion of the game started changing. He took a wicket with his first ball to break the threatening opening partnership.
Shahid Afridi sliced through their middle-order as he picked wickets two wickets with his first two balls. The double wicket maiden over rocked the Australians and suddenly they were in danger of being bowled out. The lower-order was unable to get going either and they were routed for 108 their second lowest total in the T20 Internationals. 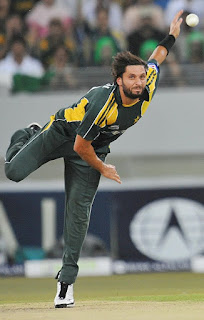 Umar Gul returned the dream figures of 4 for 8 while Shahid Afridi returned no less sensational figures of 3 for 14. They were the perfect presents for the stand-in skipper Misbah-ul-Haq who had to take over the leadership after Younis Khan was ruled out of the game due to illness.
The absence of Younis was not felt either in the field or when Pakistan came out to chase the modest total. Kamran Akmal picked up from where he had left in the fifth and final One-day Internationals. It was all too easy for Pakistan in the end.