Upon the advice of the Governor of Sindh, Dr Ishrat-ul-Ebad Khan, the Karachi Metropolitan Corporation (KMC) has provided a piece of land to the Pakistan Billiards & Snooker Association (PBSA) to let them develop a snooker academy here at the junction of Kashmir Road and New M A Jinnah Road. 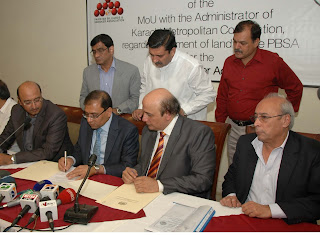 Alamgir Anwar Shaikh, President, PBSA, who signed the Memorandum of Understanding (MoU) in this regard with Mohammad Hussain Syed, Administrator, Karachi Metropolitan Corporation (KMC), at the Karachi Gymkhana on September 15, recorded his appreciation for the Governor of Sindh for the pivotal role in getting the plot allotted for the snooker academy.

The PBSA President also acknowledged the consistent support of Ahmed Chinoy, Chief of the Citizen Police Liaison Committee (CPLC), who counter-signed the MoU as a witness, for overcoming red-tape.

Rehan Khan, Senior Director, Culture and Sports, KMC, who signed as the other witness to the MoU, was also recognized for having extended cooperation to the PBSA. 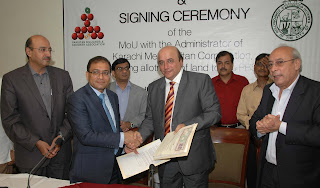 A large number of office-bearers and members of the PBSA attended the signing ceremony but one notable gentleman missing out was none other Ali Asghar Valika, who led the Association with distinction for nearly two decades, and a snooker academy was a part of his own vision.

Speaking on the occasion Mohammad Hussain Syed, Administrator, KMC, disclosed that a plot measuring around 2,250 square yards has been allotted to the PBSA for a period of 25 years, in pursuance of its policy of public-private partnership, and the lease would be extendable at the end of the stipulated period.

“Besides carrying on the infrastructure projects in the city, the KMC is fulfilling its responsibility of creating facilities for the people for sports, recreation and entertainment. The snooker academy would be greatly helpful in polishing the skills of Karachi’s cueists in particular,” he believed. 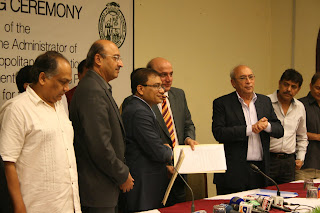 Mohammad Hussain Syed, seeking the support of the private sector in creating more facilities for the people of Karachi, advised the PBSA officials to run the snooker academy on self-sustaining basis in the larger interest of the sport.

Alamgir Anwar Shaikh, President, PBSA, revealed that the snooker academy will be built in two phases with the construction of a couple halls to be carried out in the initial phase with the emphasis of having a venue of its own for the national ranking competitions.

“We will be constructing two halls, one of them to be used for organizing championship matches and the other one to be utilized for holding practice matches. In the second phase we plan for vertical expansion by building 10 to 12 rooms upstairs where the outstanding cueists would be lodged,” he stated.

“Once we get the site plans we will have the academy complex designed. The costs to be incurred on construction will only be known when the drawings are approved. We have a few friends who, considering it a national cause, are willing to contribute for the project as it will definitely help in raising standard of snooker and creating more medal-winning opportunities for the nation,” Alamgir Shaikh added.
readmore »»