Nadeem Omar played a brilliant innings but it was not enough in the end as Omar Associates went down fighting by 22 runs in their encounter against Karachi Gymkhana here at the Karachi Gymkhana Cricket Ground on November 16. The match was organized by the Pakistan Veterans Cricket Association (PVCA). 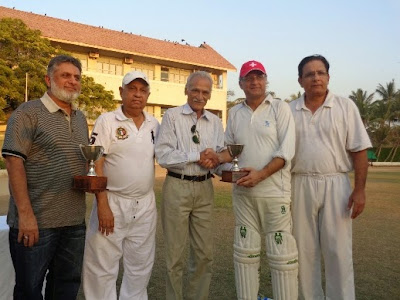 Nadeem Omar made a brilliant 68 off 64 balls to provide Omar Associates a strong platform to win the match. He was adjudged Man of the Match even though his team was unable to press home the advantage.

Batting first, Karachi Gymkhana scored 191 for five in 22 overs. Saleem Parekh was the topscorer with 50 off 48 balls, hitting six fours while Tayyab Yousuf remained undefeated on 38 off 32 balls with the help of four boundaries. Leg-spinner Sajid Ansari (2-30) was the pick of the Omar Associates bowlers.

Chasing a target of 192 in 22 overs, Omar Associates got off to a flying start through the opening pair of Nadeem Omar and Fawad Ijaz Khan, both of whom scored briskly. Fawad Ijaz was dismissed after scoring 48 off 44 balls, smashing five fours, while Nadeem Omar went on to score 68 off 64 balls with the aid of three boundaries.

The asking rate could not be maintained in the final phase of the innings and Omar Associates was restricted to 169 for four in 22 overs. Off-spinner Akhtar Munir and left-arm spinner Jaffer Qureshi picked up a couple of wickets each for Karachi Gymkhana.

The presentation ceremony was held soon after the conclusion of the match in which chief guest Muzaffar Alam presented Man of the Match award to Nadeem Omar while Saleem Parekh and Akhtar Munir were declared best batman and best bowler respectively.
readmore »»


Beaconhouse School North Nazimabad and St Paul High School sneaked into the semifinals of the HBL Inter-Schools Cricket Tournament 2014, being organized by the Pakistan Veterans Cricket Association (PVCA), by edging out their respective rivals in the quarter-finals. 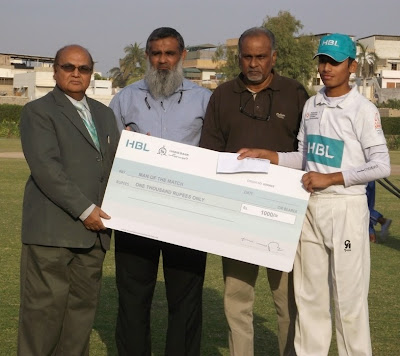 Batting first, after winning the toss, Beaconhouse School North Nazimabad overcome a shaky start to finish with a decent total 185 for seven in the allotted 40 overs. Then they bowled out HBL Schoolboys Whites for 176 on the final ball of the innings to win the keenly contested encounter.

Opener Izan Khan held the Beaconhouse School North Nazimabad innings together with a solid 47 off 93 balls. He added 80 for the fifth wicket with Muaz Bin Salman, who remained undefeated on 54 off 79 balls. Medium-pacer Sohail Khan (2-48) and leg-spinner Ashraf Khan (2-49) were the successful bowlers for HBL Schoolboys Whites.

Beaconhouse School North Nazimabad fought back through the spin trio of Waleed Hasan (2-25), Ahmed Salman (2-27) and Hasan Khan (2-30) after HBL Schoolboys Whites was put in the driving seat by their top-order batsmen Waleed Khan (54 off 73 balls), Wajid Nasir (35 off 35 balls) and Owais Butt (28 off 47 balls). Muaz Bin Salman of Beaconhouse School North Nazimabad, who also picked up a wicket in his five-over spell of leg-spin besides scoring an unbeaten half century, was declared Man of the Match.

Chasing a target of 176 in 40 overs, St Paul High School lost wickets at regular intervals to be reduced to 111 for six despite Umar Abdullah’s 45 off 102 balls. With off-spinner Mazahir Walji (3-25) delivering an outstanding spell, Beaconhouse School PECHS sensed victory when they claimed eighth wicket.

It was Mohammad Kashan’s brilliant unbeaten knock, under pressure, turned the tide decisively in favour of St Paul High School. He remained undefeated on 36 off 40 balls as the winning runs came with only eight deliveries to spare.
readmore »»