Posted by Editor at 10:14 AM .
0 comments
Labels: ICC World Twenty20 2010
By Syed Khalid Mahmood
England have finally pocketed a trophy. It was in the fitness of things, probably, that they accomplished their mission by taming arch-rivals Australia, having spoiled their party on numerous occasions in the past. 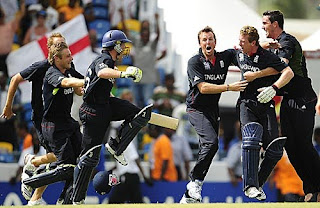 Yes it were the Australians having been instrumental in denying glories for England in every format of the game. For a change it were England, led by the inspirational Paul Collingwood, who emerged triumphant in Barbados on May 16 to be crowned as the new World Twenty20 champions.

Looks like yesterday when Australia’s Garry Gilmour had come up with the all-round performance of his lifetime to deny England a win in the semifinals of the inaugural World Cup in 1975.

Since then England, despite possessing the arsenal to rule the world, somehow had been crashing in crucial games to be robbed of the title. They stormed into the final of the World Cup in 1979, 1987 and 1992 where they lost to the West Indies, Australia and Pakistan respectively.

England could not run away with the ICC Champions Trophy or the World Twenty20 until May 16, 2010 when Collignwood’s men did not choke in the final and they proved too hot to handle even for the mighty Australia, the only unbeaten outfit in the competition.

Collingwood, the man having played the key role, alongwith coach Andy Flower, in having galvanized England into a formidable limited-overs unit, was there in the middle to hit the winning runs with a six and two fours that brought the much-awaited maiden world cricket title for his country to be proudly displayed at Lord’s.

"This is a very special moment. This is right up there, with the best, the guys deserve everything they've got today. We've won a World Cup, and you can never take that away from us. We thoroughly deserve the victory, because the way we've played throughout the tournament has been consistent and also we have been taking the game to the opposition,” Collingwood remarked. 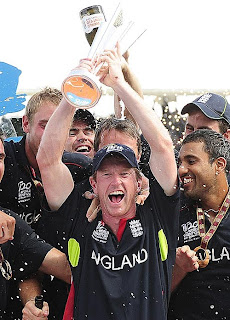 "We have had a lot of belief, and the guys have thought very well for themselves and made the right decisions. In the end, we've turned up on a big occasion like this and we've performed. I'm absolutely delighted with the guys. We knew it was a monkey on our back. We knew what it meant, and that is why I am so pleased that these last two performances in such pressurized situations were absolutely spot on," the victorious England captain reckoned.

"You can see from the way the guys have gone out from the first ball, believing in themselves, taking it to the opposition and playing a brand of cricket that is unlike England in the past. I think a lot of credit goes to every single player in the dressing room, to have the confidence to go out there and really give it their best shots and have no regrets. I think we have done that throughout the tournament and it has certainly paid off," Collingwood added.

"We are going to savour the moment and enjoy it, because we deserve to. But good teams kick on, and that's exactly what we'll get drilled into the guys. We have got a lot more potential as well - that's the scary part about it. We can go even further. But this is what we came here to achieve, and we've done it. The next step is to savour the moment, celebrate as a team - and then we'll come across the next hurdle," he observed before rushing to join his teammates for the celebrations.