Posted by Editor at 6:32 PM .
0 comments
Labels: India v New Zealand 2010-11
By Syed Khalid Mahmood
The International Cricket Council (ICC) had introduced the rankings in order to keep the interest alive in dead rubber games. It was also considered a measure to prevent match fixing as there seemed greater chance for such matches to be ‘fixed.’ Also the ranking points served as incentives for the fancied teams while taking on lesser mortals.

But all such incentives and precautionary measures aimed at controlling the evil prove meaningless if money becomes the sole criterion and things like the national interest and glories for country are pushed to a side.

Look at the latest example. The Indians are the top ranked side in Test cricket, a position they have thoroughly deserved after performing consistently against the other high flying nations. They are blessed with the most potent side in world cricket at the moment and they have come good against the toughest of rivals.

But India have had a big problem throughout the last couple of decades. They have not been at their best while taking on those sides found wanting elsewhere. They have a history of coming up with below par performances against teams like New Zealand, Zimbabwe, Bangladesh and Kenya. 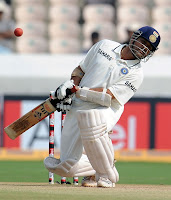 People thought that they would do away with this old habit while taking on New Zealand in the current Test and ODI series with the ranking points at stake and India aiming to consolidate at the top of the tree.

Such thoughts have remained mere thoughts and the Indians have continued to show complete disrespect for their position. More than anything they are playing with the emotions of their own people. It remains to be seen for how long the cricket enthusiasts in India will tolerate this exercise.

It has been reported that India would be losing ranking points irrespective of the result of third and final Test at Nagpur starting on November 20. They can control damage by winning the game in which case they will lose only one point. A draw will cost them four points while a defeat, which can never be ruled out when they are in such generous mood, will deprive them of six points. 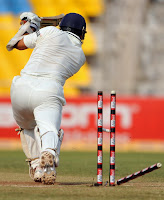 Batting has been India’s forte in the recent past and their batsmen have plundered the most lethal of bowling attacks rather ruthlessly on all types of pitches. Will you believe it that all their premier batsmen, with the sole exception of Virender Sehwag, are struggling at home against the friendliest of bowling attacks?

Wasn’t it a pity that the cricket fans of Ahmedabad and Hyderabad were denied the pleasure of watching Sachin Tendulkar at his best? Who would believe that the New Zealand bowlers would tie him down this much before scalping him cheaply against the heaviest of odds not once but three times in a row?

It’s very difficult to say if Tendulkar would indeed be allowed to reach the much-awaited 50th Test century at Nagpur or the plan is to defer it further. We will know it over the next few days.
readmore »»