Both the Pakistani cueists, Mohammad Hunain Aamir and Mohammed Majid Ali, after having performed exceedingly well in the league matches, crashed in their maiden knockout appearance of the 13th Asian Under-21 Snooker Championship 2012, in Goa, India, on April 6. 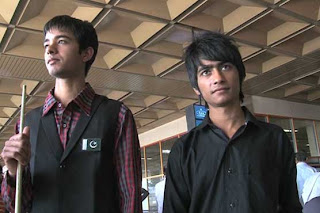 Hunain Aamir and Majid Ali, both of whom were making their debut at the continental level, went down fighting against their respective rivals in pre-quarter-finals.

Laxman Rawat of India edged out Majid Ali in the afternnon session and a few hours later all Pakistan’s hopes of capturing the Asian crown at the junior level for the first time, were dashed when Mohammad Lababi of Iran blew the whistle on Hunain Aamir.

Majid Ali, who became the Group D champion after winning all his three league fixtures, went down fighting in the pre-quarter-finals against Laxman Rawat of India. The promising Pakistani cueist played well to register big breaks in the high-pressure game but he was unable to press home the advantage.

The youngster from Faisalabad, who ended as the runner-up in the Jubilee Pakistan National Junior Championship earlier this year in Lahore, had registered impressive victories over Akani Songsermasawad of Thailand, Chang Yu Kiu of Hong Kong and Slyavosh Mozayani of Iran in his league encounters but he fell at the very hurdle in the knockout phase, starting from the round of 16.

In the penultimate frame, Hunain Aamir, on whose shoulders Pakistan’s hopes of bringing home the title rested after the elimination of Majid Ali, fired a break of 58 to take the match into the seventh frame but he didn’t get much of a chance to visit the table which turned decisive.

Hunain Aamir, who reached the pre-quarter-finals even after succumbing to defeat in his last league encounter at the hands of Hossein Vafaei Ayouri, the current world champion from Iran earlier in the day, could not regroup quickly.

Pakistan’s reigning national junior champion from Sialkot had booked his place in the pre-quarters from the Group A by trouncing Lalit Dahiya of India and Marcus Lim Wei Jie of Singapore in his first couple of games.

His third and final against Hossein Vafaei Ayouri, was to decide the Group A champion, and the top seeded cueist from Iran, triumphed 4-1 with the frame scores of 97-4, 69-0, 79-1, 51-75, 96-0. The only consolation for Hunain was snatching the third frame in which he surprised the world champion with a break of 57.
readmore »»