Graeme Smith on verge of completing a unique hundred

The South African skipper, Graeme Smith, is on verge of completing a unique century when he steps out to lead his country, the top-ranked team in the world, in the first Test against Pakistan in Johannesburg starting on February 1. 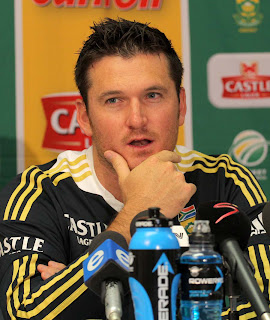 He is set to become the first cricketer to captain his team in 100 Test matches. It’s going to be a record that’s unlikely to be emulated in view of the growing popularity of the limited overs games.

Smith will, in fact, have dual celebration on February 1 as its going to be his 32nd birthday as well.


His family and friends are looking forward to the occasion and the Cricket South Africa (CSA) already has declared the first day of the opening Test has as 'Biff day' after the skipper’s nickname.

February 1, 2013 is going to be day which Smith and his teammates might not be able to forget in their lifetime. It’s going to be a momentous occasion for the South African cricket as well.

The CSA, joining in the celebrations in a big way, has also displayed a giant shirt, having the details of all of Smith's centuries printed on it,, on the wall of a popular sports clothing store in a mall in Johannesburg. 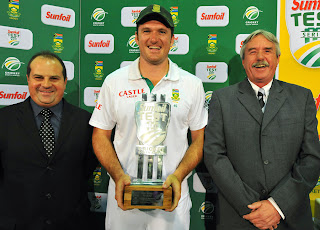 The cricket fans have been invited to write a personal message on the whites and some of them will appear on the scoreboard during the match.

It’s going to be a dream-come-true outing for Smith for he will be leading his nation for the 100th time, having made it the number one team of the world. He could not have probably asked for more.

The South African cricket authorities also deserve full credit for having reposed confidence in the leadership skills of a young Smith after the humiliation at home during the ICC World Cup in 2003.

The explosive left-handed opening batsman was only 22, having played only seven Test matches, when the captaincy was passed on to him with the mission to build a team that could rule the world.

He has proved to be the perfect guy in leading by example. He has scored 26 Test centuries and South Africa have either drawn or won the match. It is a record which should indeed make him proud. 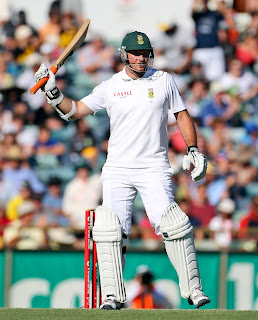 Smith has taken on so much responsibility over the years and has delivered more often than not whenever his team needed him most.

"He leads from the front and that's what you want in a leader. If he says something he'll be the first guy to go forward and do it. He's opening the batting, so he's getting out there first and setting the tone and the example. He's an in-your-face kind of guy who will take on challenges and never back down,” Jacques Kallis, the only member of the current South African line-up to have played under different leaders, reckoned.

“He doesn't ask any player to do anything he wouldn't do himself. There are times to be brash and there are times to absorb the pressure and that's what he's developed over the years. He's learnt when to be which character which has probably been his biggest improvement as a captain," Kallis, one of the greatest-ever all-rounders of the game, added.
readmore »»