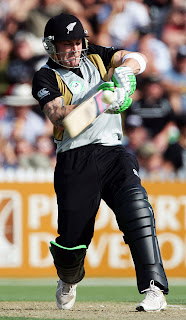 Watching the recent contests between New Zealand and the West Indies makes one feel little disconsolate. There was plenty of entertainment in both the Twenty20 Internationals but the inconsistency of performance would not have pleased either side.
The ground fielding as well as the catching was pathetic to say the least when the West Indies came out at Seddon Park, Hamilton, in the second game after having narrowly won the first one at Eden Park, Auckland, a couple of days ago.
The two New Zealand openers, Jesse Ryder and Brendon McCullum, took full advantage of the sloppy work in the field that blunted the enthusiastic West Indian bowling.
The 130-run opening stand in just eleven and a half overs between Ryder and McCullum, both of whom blasted quick half-centuries, had set the platform for a real big total.
Once the belligerent opening partnership was broken it was the turn of the New Zealand batsmen to demonstrate their lack of skills. They lost nine wickets in the 8.2 overs to finish with 191 in 20 overs.
The West Indians had pulled it back nicely after their dreaded spell in the field in the first half of the New Zealand innings. Once the fielding was lifted with Xavier Marshall’s catch the visitors looked a different side altogether and New Zealand could not cope with the pressure.
Although containing the hosts to 191 for nine represented a grand recovery, their batsmen still had a mountain to climb. The having failed to reach the target of 156 in the first game despite the heroics of skipper Chris Gayle had to do something sensational to get to 192 even against a bowling attack not so menacing.
Gayle lived upto his reputation of being Mr Inconsistent and the West Indians were in disarray even before getting started. To their credit tourists succeeded in getting past 150 once more, 155 to be precise. So for the second time running they managed to score 155 batting second and on both occasions it was not enough.
Ramnaresh Sarwan, promoted to open the innings, gave the impression of being a master blaster while hammering 53 off 36 balls but one is not sure if he would continue to deliver for long, such has been the unpredictability of the West Indians.
His team would have easily won the first game had he scored even half of these runs at a time when his captain was in full flow and the target was getting progressively easier. 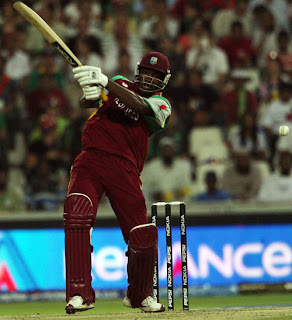 The West Indians should have easily won the Boxing Day encounter after having restricted the hosts to 155. Gayle’s swashbuckling knock had provided the best possible opportunity for the middle-order to knock off the runs without worrying for the run-rate.
Their self-destruction allowed the hosts to stage a comeback from no where and the match looked wide open in the final over. An edged boundary by Sulaiman Benn had given the West Indies the upper end but he couldn’t connect properly on the last ball and the match was tied.
Since it was a Twenty20 encounter a tie-breaker was to be witnesses. A new method called ‘Eliminator’ was used according to which both the teams were allowed to bat for one over each. Gayle’s magnificent hitting won the day for the West Indies but it was a most unsatisfying win and they were beaten neck and crop in the following game.
readmore »»