I agree with Ian Bishop, a West Indian speedster of yesteryears, that the hosts let slip a Test series against Pakistan they could have won and they will be disappointed with the final result.

Yet again it was the generosity of the West Indians that allowed Pakistan's to level the two-Test series. The hosts were guilty of taking their rivals casually and not giving the kind of performance they were capable of.

As much as the West Indian cricketers, their administrators also played a definite role by providing Pakistan the red carpet. When even a kid knew that the Pakistan batsmen were vulnerable to swing and pace there was absolutely no sense in preparing tracks that suited spinners.

The West Indians proved very generous hosts indeed by letting Pakistan play both the Tests on slow pitches to surrender the home advantage. We came across the kind of pitches in the Caribbean that the Pakistani cricketers love at home.

Pakistan's slow bowlers picked up as many as 32 of the 40 available wickets and they themselves were surprised by the amount of turn on offer at the two venues. It certainly was a pleasant surprise for the spinning duo of Saeed Ajmal and Abdul Rahman who were also assisted by part-timer Mohammad Hafeez. 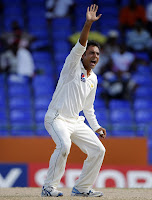 "We have been surprised by the bounce and the spin that we have gotten from the pitches. This is why we are very happy. Spinners are happy when they get pitches that turn, but to also get the bounce is good, and the West Indies have struggled against the spin and the bounce. It would not be a bad idea to dig up this pitch, and carry it around with me, so that I can get plenty of wickets," an ecstatic Abdul Rahman observed.

Equally happy were the Pakistani batsmen like Taufiq Umar and Misbah-ul-Haq, who notched up centuries on the docile pitch that blunted the West Indian fast bowlers.

The home side had to pay very heavy price for having let the Pakistan tail-enders wag in the first innings. The last wicket stand between Saeed Ajmal and Tanvir Ahmed turned the tide decisively and Pakistan won the match by 196 runs after being in doldrums on the opening day.

No matter what the West Indian skipper, Darren Sammy, had to say in the post-match media briefing not many people were inclined to agree with him when he spoke about his team having taken plenty of positives out of the series. 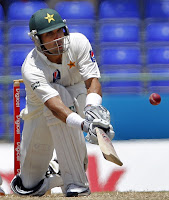 It became a forgettable series for them in the end. They squandered golden opportunity to win a Test series for the first time in more than two years. All they needed was to exert some more pressure on the visitors which they didn’t do.

The young West Indian brigade had the momentum coming into the second Test and they had Pakistan on the run in the first innings but the last-wicket stand turned it around.

The lady luck smiled on Misbah-ul-Haq and his boys who made the most of the opportunities offered to them. They were more than happy to have squared the Test series, after pocketing the ODI series, with all those issues regarding selection and management.