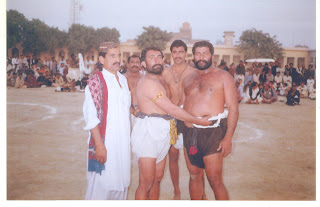 There has been a flurry of activities of late as far as the traditional sports are concerned in the province of Sindh. After having organized the spectacle of Donkey Cart Race in Karachi, the Sindh Sports Board (SSB), an organ of the Ministry of Sports, Government of Sindh, has held quite a few other events in the interior regions to bring smiles on the faces of the people who generally don’t have the access to healthy and recreational activities.

It’s indeed very heartening to note that besides patronizing the Olympic sports, SSB has also been laying emphasis on promoting traditional sports like kodi kodi, malakhro and wanjwatti.

The provincial government’s sports department, headed by their versatile and visionary Secretary, Shoaib Ahmed Siddiqui, has been doing a fantastic job by engaging the youth in healthy competitions. It has been the policy of the Sindh Sports Minister, Dr Mohammad Ali Shah, to ensure sports events throughout the year.

After all it was his brave decision to hold the last Sindh Games during the month of May in Larkana, a move that had pleasantly surprised even the Sindh Chief Minister, Syed Qaim Ali Shah, who was the guest of honour in the closing ceremony.

Not surprisingly the malhs from the interior of the province dominated the Inter-District Malakhro Championship 2010 organised by the SSB in the town of Hala recent where the contests were held in three weight categories, heavy, medium and light and cash awards of Rs 40,000 were disbursed in the prize distribution ceremony in which Mohammad Hanif Mirchiwala, Director Sports, Government of Sindh, was the chief guest.

Rahat Pahgon, Ali Nawaz Methlo, Muslim Solangi, Maula Bakhsh, Safdar Almani and Mantha Bugti turned out to be the outstanding performers in the latest Malh contest staged by the SSB as part of their efforts to promote traditional sports.

The malhs from Khairpur and Nawabshah stole the limelight in an Inter-District Malakhro Championship 2010 organized by the SSB in the town of Panno Aaqil the following day.

Mohammad Phalpoto of Khairpur stood first in the heavyweight category with Qurban Halepoto and Haji Haepoto, both of them from Nawabshah, grabbed second and third position respectively.

The contests were held in three weight categories, heavy, medium and light and cash awards of Rs 45,000 were disbursed among the top three performers in the prize distribution ceremony in which Syed Sumair Ahmed, EDO, CDD, Sukkur, was the chief guest. 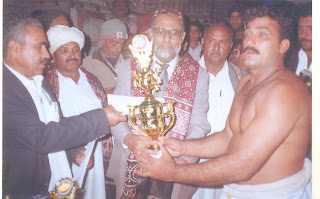 It was revealed than more than 10,000 people turned up to witness the latest Malh contest staged by the SSB much to the delight of the enthusiasts of the traditional sports.

Then hosts Ghotki emerged triumphant in the Inter-Taluka Kodi Kodi Tournament 2010, organized by the SSB as part of their plans to revitalize the traditional sports.

Once more thousands of area people turned to witness the spectacle in which the team from Ghotki took the first position and Mir Mathelo stood second while the next two slots were shared by Sarkand and Dehri. readmore »»