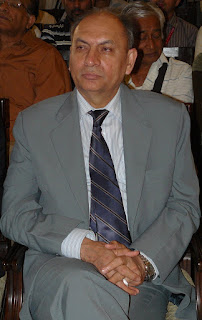 Prof Ejaz Ahmed Farooqi, an eminent educationalist, has also distinguished himself in the field of sports and community service. Hailing from Karachi, he is one of those very few proactive personalities, who believe in letting his work do the talking.
Having a proven track record in the field of education, Prof Ejaz Farooqui has made his presence felt on the cricket scene in a remarkably short span of time. He’s now recognized as one of the leading cricket administrators. His level of commitment for the cause of the game is commendable.
He was himself a cricketer in his younger days that seems to be the reason why he has been more towards cricket administration. He was elected as the Chairman of the Zone II of the Karachi City Cricket Association (KCCA) in 2006 and what a contribution he has made to the game since then.
He has been in the forefront in promoting and supporting the young cricketers not only of his zone but the entire city. He has been the motivating force behind the launch of so many tournaments that have taken place from time to time during the past few years.
The KCCA Zone II has been benefiting in particular under his leadership where greater number of tournaments are being held than ever before. He has himself volunteered to sponsor the majority of the tournaments to ensure that the cricketers of zone remained engaged in quality cricket throughout the year.
The results are also there to see as the KCCA Zone II has emerged victorious in the Under-19 tournaments a couple of times besides winning the Under-17 event once.
It’s very heartening to note that the KCCA as well as the Pakistan Cricket Board (PCB) have recognized the services of Prof Ejaz Farooqui and he has been entrusted with key assignments recently.
He was appointed the manager of the PCB XI for the four-day match against the visiting Zimbabweans while he also the manager of the Patron’s XI in their two-day match against Sri Lanka last month.
The PCB and the KCCA should avail the services of a man of his caliber who has the expertise as well as temperament to do justice to the challenging assignments. Being a highly educated man, his attitude towards other is more humane. We need humble and unassuming people like him at the top who care for others.
Prof Ejaz Farooqui should now be playing a long innings in the field of cricket administration. One hopes that he will soon be getting bigger assignments in the larger interest of the sport. The game of cricket needs capable and selfless people like him. 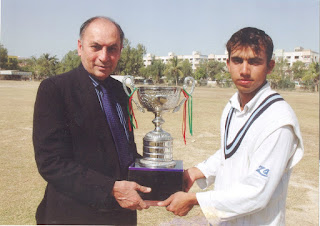 He is particularly keen to serve the areas that were neglected in the past for one reason or the other. It must have been very heartening for the young cricketers of Surjani Town in particular to have welcomed the respected figure of Prof Ejaz Farooqi in a tournament held there.
It’s not often to find a personality his stature pay a visit to the cricket grounds of Surjani Town and it was a nice gesture on his part to have gone there to witness a game and distribute the prizes.
The occasion was the final and presentation ceremony of the Surjani Champions Trophy Cricket Tournament. His speech must have gladdened the hearts of the area cricketers and organizers.