The Pakistan Billiards & Snooker Association (PBSA), while awaiting the government support, looks to consolidate on the glories earned by the cueists as well as the administrators during the course of the just concluded year. 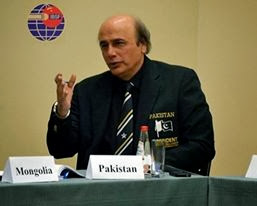 “2013 was probably the most fruitful year in the history of the Pakistan snooker as our cueists accomplished outstanding feats at the international level while we also made a breakthrough in the development of infrastructure facilities for cue sports,” Alamgir Anwar Shaikh, President, PBSA, remarked in an interview at the Karachi Club.

“Now we are looking forward to the new year with realistic hopes of capitalizing on the good work of the recent past. The momentum is with us and we desire to make it count despite the resource constraints,” he asserted.

“Add to this the historic triumph of Mohammad Asif in the World Championship at Sofia, Bulgaria, in December 2012. We have had a terrific run of 12 months. Never before in our history so much had been achieved within a year,” Alamgir Shaikh pointed out.

“While the PBSA continued holding the national rankings tournaments at the designated time throughout the year to let the cueists maintain their excellent form and fitness, the Association also worked in the areas of creating the infrastructure for snooker. The work continued on developing a snooker academy in Karachi while an academy was established in Faisalabad to facilitate the cueists of the upcountry region,” he continued.

“We have been able to achieve this with negligible support from the government sector. The promises on their part have not been fulfilled yet, despite assurances, which put us in very awkward position. But we haven’t let the sport suffer and we have managed to do it with untold problems at our end,” the PBSA President complained.

“The government functionaries at the top level are sporting enough to acknowledge our contribution in bringing laurels for the country but, for some unexplained reasons, they have not been able to extend us the support we have deserved,” Alamgir Shaikh stated.

“We have had numerous meetings in Islamabad and every time we have been told that the outstanding funds will be released shortly. We do understand the administrative problems at their hand but, as they have agreed, our Association merits special consideration in view of our outstanding performance in the recent past,” he said.

“Our plans for 2014 might suffer if the government didn't release the payments which are long overdue now. It will be a national tragedy if the sport of snooker, which was earned continued glories during the last 12 months, is made to suffer due to red-tapism,” he warned.

The PBSA hoped that the Ministry of the Inter-Provincial Coordination and the Pakistan Sports Board (PSB) would be considerate enough not to let snooker suffer by taking positive actions at the start of the year.
readmore »»