The spinners continue to dominate the second edition of the Indian Premier League (IPL) being held in South Africa and it was the turn of the left-armer Shadab Jakati to steal the limelight for the second time running in a matter of three days. 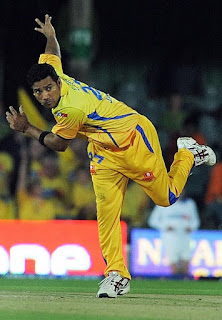 He has spun Chennai Super Kings to the top of the points table, having returned his second successive four-wicket haul, something that’s rather unusual in the shortest version of the game. He had earlier engineered the victory for his team over Delhi Daredevils with the magnificent figures of 4 for 24.

His superb bowling earned third consecutive win for Chennai on May 4 as they overwhelmed Deccan Chargers by a wide margin of 78 runs at the Buffalo Park in East London. He returned the exceptional figures of 4 for 22 to win the day for his side.

Jakati was pressed into service by skipper Mahendra Singh Dhoni at a critical when Dwayne Smith and Rohit Sharma were in the process of literally sending every ball to the spectators.

Smith and Sharma had brought Deccan back in the game after a nightmarish start when their top three batsmen perished without troubling the scorers. The game was on as they were whacking the ball with awesome power.

The likes of Albie Morkel and Laxmipatty Balaji had gone for plenty and Dhoni had to take them off earlier than he would have planned. Obviously one couldn’t have expected Balaji to be denied a second over.

Things began to happen from the moment Jakati arrived at the bowling crease. He was smashed for a six in his first over by the rampaging Smith but a certain element of doubt was created in the mind of the batsmen when the ball started to turn sharply.

Sharma was the first to go, in Jakati’s second over. It was a huge breakthrough because the partnership had grown into dangerous proportions and the match could have swung Deccan’s way had it lasted for a few more overs.

Then came the turning point of the match as Jakati bamboozled Smith, who had scored 49 off only 23 balls. The match was well and truly in the bag of Chennai after the departure of Smith. 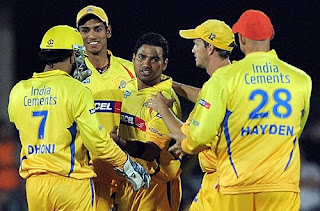 Jakati captured a couple of more wickets to seal the fate of the match before the senior spinner in the side, Mutiah Muralitharan, joined the party. Both the spinners bowled exceptionally well, giving nothing away to their opponents.

Deccan had fought back through Smith and Sharman after their fancied top three was blown away in a matter of minutes. Mind you Adam Gilchrist, Herschelle Gibbs and VVS Laxman, all of them world-class batsmen, were their up the order and neither of them could score a single run.

Earlier, batting first Chennai had posted an impressive score of 178 for three in 20 overs with Dhoni, having promoted himself to number three, playing gem of a knock. Matthew Hayden also contributed his bit as did Suresh Raina.