No matter how much purchase the pitch was offering to the debutant West Indian leg-spinner Devendra Bishoo in the fourth innings of the first Test against Pakistan at the Providence Stadium in Guyana it was the pace that had to make to difference and so it. 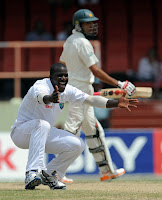 Bishoo could have been a potential match-winner against any other side in the given circumstances but it was extremely unlikely for him to spin Pakistan out even though the batting was brittle and lacked experience or class.

Probably the weakest of all the Pakistani teams to have embarked on a tour of the Caribbean, Misbah-ul-Haq and his teammates must have been hoping for some more overs from Bishoo to take the fight to the West Indian camp.

The target of 219 in the low-scoring game was always going to be a challenging proposition with the uneven bounce of the track. It may have surprised a few self-proclaimed experts but all the 10 wickets were shared by the fast bowlers and the much talked about Bishoo went wicket-less even after 21 overs. 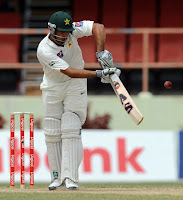 In fact the complete failure of Bishoo in the second innings must have been a cause of concern for the skipper Darren Sammy, who himself took the centre stage when it mattered most. It was his spell that sealed the fate of the match.

The West Indians demonstrated the rare self-belief and attacked their opponents with purpose, unlike the first three One-day Internationals in which they were found guilty of having lost it mentally.

Sammy returned a five-wicket haul to bowl his side to first Test victory for more than a year. The West Indies had not tasted a Test win after that sensational spell from Jerone Taylor had blown England away early last year.

“We as a team needed this performance. Lately, things hadn't been going well but I had the belief, this team had the belief," Sammy observed after grabbing Man of the Match award, which he narrowly snatched from teammate Ravi Rampaul. 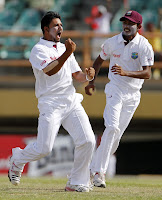 "Rampaul looks fit and has worked really hard with Ottis Gibson. It was a tough decision to pick between him and Fidel Edwards," Sammy added.

"It was a difficult pitch. We found ourselves not playing the spin too well. But I commend the guys for the effort. They batted out time and put in a total which in the end was enough to get the victory,” he acknowledged.

Pakistan’s captain Misbah, who led the fightback in the company of Asad Shafiq and Umar Akmal, was sporting enough to concede that the better team had won.

“To lose this Test is disappointing, they played better cricket and bowled disciplined lines," he stated.

“We dropped so many catches and gave away so many runs to the lower order. We were a little disappointing from the batting point of view also. We fought well on the third day to recover after losing early wickets but most of our guys got out to good balls," Misbah believed.
readmore »»
Links to this post