Different people have different theories about India’s disastrous campaign in the four-Test series in which they were whitewashed by England but in my opinion the Indian Premier League (IPL) was the main reason of the sudden decline of the top ranked country of the last two years.

No matter what the officials or the cronies of the Board of Control for Cricket in India (BCCI) have to say, the injuries to key players, resulting due to the excessive workload imposed on them in the form of the IPL, cost them dearly.

India at full strength could never have met this kind of fate of the hands of Andrew Strauss and company, who find themselves elevated to the number one position in ICC Test rankings. Whether they deserved this slot or not is another matter.

Due to injuries and illness India couldn’t field their best team in any of the four Test matches. They didn’t have adequate insurance because it’s never easy to replace the greats.

The newcomers, no matter how talented, skilled or promised, cannot be expected to emulate the likes of Sehwag, Dravid or Zaheer because it took them years to build their reputation.

The BCCI is solely to be blamed for having shifted its focus from cricket to commercialism. As they say excess of anything is bad. Heavy overdose of T20 cricket day in and day out was bound to affect the cricketers and the burnout has resulted in their recent humiliation in England. 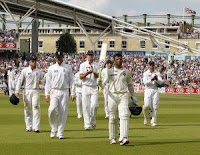 Why the BCCI is joking with the public? Was there any sense of holding a new edition of the IPL, immediately after the 2011 World Cup? What was the point in staging a domestic tournament so soon after having hosted the most prestigious international event?

Wasn’t the BCCI making fun of its own cricketers by asking them to consume energies in the IPL when the tours of the West Indies and England were round the corner? What was more important to them, prestige or money?

Wasn’t it a crime as heinous as treason, depriving the national team of its best cricketers? Shouldn’t the BCCI officials be brought to book for having brought the game to disrepute?

The BCCI didn’t find problems in letting their top performing players abstain from international tours after ensuring that they made an appearance in nearly each and every outing of the terribly long IPL, whose credibility has always been in doubt.

The Indians survived in the West Indies because the home side was not threatening enough to make the most of the depleted visitors. Not England. A lot of key players were carrying injuries and it became evident from the day one of the series that India would struggle from the moment Zaheer had limped off the field.