Pakistan's newest Test captain, Misbah-ul-Haq Khan, has reckoned that the recently drawn two-Test against the formidable South Africans in the United Arab Emirates (UAE) would serve as a morale-booster for the upcoming tour of New Zealand. 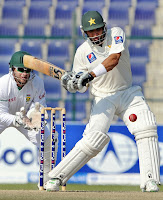 “It was quite an accomplishment on our part to have come with creditable performance against our fancied rivals and this show of ours should serve as an inspiration for the tour of New Zealand starting next month,” Misbah observed in his exclusive chat with the APP correspondent, Ehsan Qureshi, soon after returning from the UAE.

"The team put up a fighting performance and holding the powerful South Africans to a draw in both the Test matches was a great sign,” he stated.

"I feel proud and satisfied that I contributed my bit in saving both the games for Pakistan. I want to serve the country to the best of my abilities. My priority is not to prove any of my critics wrong with my batting but my goal is to serve the country,” he commented.

"The credit goes to the whole team not only to me or Younis Khan. It was a team effort all the way," Misbah, having scored 212 runs at an average of 53, added.

"The upcoming series against New Zealand will be tough. But the confidence the guys have gained by competing with South Africa will certainly serve as a moral-booster," the 36-year-old veteran batsman, who has now scored 1128 runs in 21 Test matches at an average of 38.37 with two centuries and seven fifties, remarked. 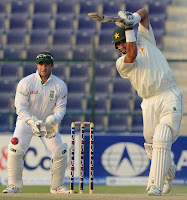 "I know the ball will be moving around in New Zealand. But our team had done reasonably well there last year and our boys should be able to perform even better this time," he thought.

”The absence of pacers like Muhammad Aamir and Muhammad Asif may be felt.but I think there are some good pace bowlers around in Umar Gul, Tanvir Ahmed and Wahab Riaz We have to rely on the available resources and the team provided by the selectors," he said.

Commenting on the wild-stroke played by Umar Akmal in the first Test, the Pakistan skipper pointed out that even the most aggressive of batsmen needed to be patient in the matches of longer duration.

"Umar is highly talented and aggressive by nature and went after the bowling and paid the penalty. He is expected to learn from his mistakes," Misbah hoped. 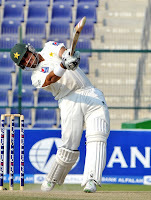 Responding to another question about the availability of leg- spinner Danish Kaneria for tour to Down Under, he said it was upto the Pakistan Cricket Board (PCB) and selectors to decide about it.

Similarly, on the selection of former Pakistan Shoaib Malik and Kamran Akmal, he said it was again the domain of the Board, however, as far as his personal opinion was concerned, he would like them in the team.

He described new stumper Adnan Akmal as talented adding that it would take him time to learn the tact of the trade with the passage of time.
readmore »»