The table tennis tournament is a part of the Karachi Press Club’s Summer Sports Festival 2010 being held with the support of the sports department of the Government of Sindh. The competitions in snooker, chess, scrabble and badminton have already been completed.

It may be recalled that the KPC Summer Sports Festival 2010 was opened by Shoaib Ahmed Siddiqui, Secretary, Sports and Youth Affairs to the Government of Sindh, in a very impressing ceremony on June 30.

Shaukat Omari, an active social worker besides being a former table tennis champion, placed on record his appreciation for the officials of the Karachi Press Club to have revived the Sports Festival that used to be quite a sought after event in the past.

The inauguration ceremony of the table tennis tournament turned out to be quite lively in the presence of a large number of media corps. After performing the formality of cutting the ribbon, Shaukat Omari played a couple of big rallies with Khurram Baig, Secretary of the KPC’s Indoor Games Committee.

There were no speeches on the occasion but the KTTA Secretary could not conceal his feelings and he was friendly enough to share them with the media.

“I am really thrilled to watch my media friends taking to table tennis so seriously,” he observed in a friendly chat while a group of enthusiastic KPC members displayed their talents on the table in the air-conditioned hall. 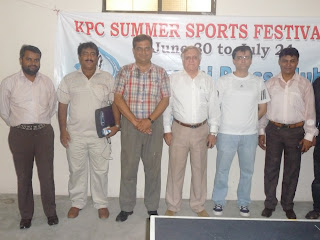 “I think it would be a better idea to have more than one table, space permitting. Table Tennis, besides providing recreation, is also very helpful in burning calories and the busy media professionals can have a game or two in the limited space between their pressing assignments,” Shaukat Omari suggested.

The KPC President, Imtiaz Khan Faran, complimented the Sports Committee for having done a fabulous job and he encouraged them to continue doing the good work despite the uncalled for and even senseless criticism from certain quarters.

He also announced that the Governing Body of the KPC was considering the proposal of building a mini-sports complex type of thing in the backyard.

Meanwhile a total of 19 entries were received for the KPC Table Tennis Tournament, being played on knockout basis.
The draws were taken out by Zulfiqar Ahmed, Joint Secretary, KTTA, in the presence of the participants and the KPC officials soon after the inauguration ceremony. The matches will start at 4 pm on July 23 with the semifinals and the final to be played on July 24.
Khurram Baig, Maqsood Hussain, Rashid Ali Khan, Ashraf Khan, Saddam Tufail Hashmi, Hasan Mansoor, Mohammad Azhar and Ehsan Qureshi were given a bye in the first round while the other KPC members to have entered the contest are Ubaid Narejo, Moosa Kaleem, Syed Javed Iqbal, Mahmood Ahmed Khan, Zeeshan Azmat, Khurram Ali Shah, Akhtar Baloch, Adil Jawwad, Maqbool Ahmed, Jamal Khurshid and Nasim Rajput.
readmore »»