Posted by Syed Khalid Mahmood at 9:33 AM .
0 comments
Labels: IPL
By Syed Khalid Mahmood
The 15th match of the DLF Indian Premier League 2009 at the Newlands, Cape Town, featuring Rajasthan Royals and Kings XI Punjab had a couple of additional flavours besides offering the usual glamour and entertainment. 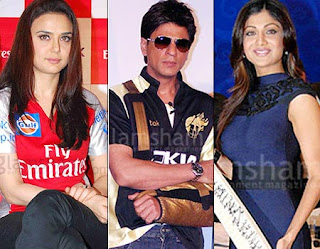 It brought head-t-head in the field two of the most talented all-round cricketers of the world who were brothers. Irfan Khan Pathan was playing for Kings XI Punjab while Yousuf Khan Pathan was doing duties for Rajasthan Royals.
Off the field it was a one-to-one contest between the two Bollywood queens, Preity Zinta and Shilpa Shetty, the owners of Kings XI Punjab and Rajasthan Royals respectively. The third Bollywood personality owning a team in the IPL is the legendary Shah Rukh Khan, who is right there in South Africa to support his Kolkata Knight Riders.
There was an early disappointment for the Bollywood idols as their teams had crashed in opening matches but things have improved as the tournament has progresses. Preity’s Kings XI Punjab, in fact, has now moved to the third position in the points table while Shah Rukh’s Kolkata Knight Riders and Shilpa’s Rajasthan Royals, the defending champions, are currently placed in the bottom half.
Preity has had more reasons to smile during the tournament and she must have felt on top of the world when her boys downed Shilpa’s team while defending a modest total on another noisy and fun-filled evening at the Newlands.
If Preity came out trumps in the duel of the Bollywood queens against Shilpa it was Irfan who overshadowed Yousuf in the battle of brothers on April 26.
Irfan displayed great maturity with bat and ball and he was very rightly adjudged Man of the Match for having made the most significant contribution to his team’s success. He proved once again that he’s an immensely gifted all-rounder who doesn’t lack in temperament.
It was his partnership with the vastly experienced Sri Lankan, Kumar Sangakkara, which rescued his team from a precarious 48 for four in the ninth over. The two left-handers batted very sensibly that allowed Kings XI Punjab to post a fighting total of 139 for six in the allotted 20 overs.
While Sangakarra helped himself to yet another half-century, Irfan chipped in with a superb 39 off 33 balls laced with a couple of sixes and as many fours. He didn’t allow the fancied spin duo of Shane Warne and Yousuf Pathan to get on top. 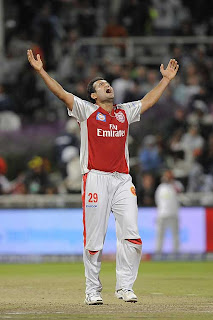 It was Irfan back in limelight when skipper Yuvraj Singh handed him over the new ball. He responded straight away by picking up a couple of wickets in his opening over. It was a cracking delivery that totally caught Graeme Smith by surprise as he had moved forward to defend. It was a big wicket and opened the floodgates for Kings XI Punjab.
With Yousuf Abdulla, another devastating left-arm fast-bowler, also doing the damage from the other end there was not much the Rajasthan Royals batsmen could have done to change the course of the proceedings.

Even Yousuf Pathan, enjoying a purple patch, was unable to dominate the two left-arm quickies before being scalped by leg-spinner Piyush Chawla. With his dismissal vanished hopes of Rajasthan Royals for it was going to be the day of his brother Irfan whose team Kings XI Punjab were the deserved winners.